Prince Harry says new baby is ‘absolutely to die for, so I’m absolutely over the moon’

Britain's Prince Harry said his wife Meghan and new born son were doing well and described the baby as "absolutely to die for", speaking to media after the birth of the seventh in line to the British throne. Video: Reuters 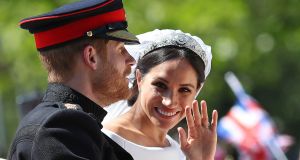 Britain’s Duchess of Sussex Meghan Markle, wife of the queen’s grandson Prince Harry, has given birth to a baby boy, Buckingham Palace said in a statement.

“Her Royal Highness The Duchess of Sussex was safely delivered of a son at 0526hrs,” the palace said “The baby weighs 7lbs 3oz. The Duke of Sussex was present for the birth.”

Prince Harry was reported as saying: “I haven’t been at many births. “This is definitely my first birth — it was amazing, absolutely incredible.

“I’m so incredibly proud of my wife.

We are pleased to announce that Their Royal Highnesses The Duke and Duchess of Sussex welcomed their firstborn child in the early morning on May 6th, 2019. Their Royal Highnesses’ son weighs 7lbs. 3oz. The Duchess and baby are both healthy and well, and the couple thank members of the public for their shared excitement and support during this very special time in their lives. More details will be shared in the forthcoming days.

The baby will be seventh in line to the throne and the queen and the Duke of Edinburgh’s eighth great-grandchild, and a fourth grandchild for the Prince of Wales, Harry’s father.

The baby’s sex will be a surprise for the couple, who have chosen not to find out what they were having.

Ahead of the birth, the duke and duchess made a personal decision to keep the arrangements private, amid speculation they had opted for a home birth at their new home Frogmore Cottage, close to the queen’s Windsor Castle home.

They have said they will only share the news of the baby’s arrival once they have had a chance to celebrate privately as a family.

Meghan was last seen on an official engagement on March 19 when she signed a book of condolences in London with Harry for the victims of the Christchurch terror attack.

The American former actress and the duke moved into their renovated home Frogmore Cottage on the Windsor Estate at the beginning of April, as they prepared for their baby’s arrival. – PA