Entertainer arrested by British police as part of Savile inquiry 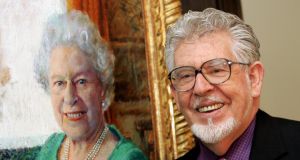 Rolf Harris was today named as the veteran entertainer who was arrested by police investigating allegations of sexual abuse following the Jimmy Savile scandal.

Harris (83), was originally interviewed by detectives from Scotland Yard’s Operation Yewtree in November and was then arrested over the allegations on March 28th.

Until today, the TV personality, who performed for Queen Elizabeth at her Diamond Jubilee concert last year, had only been named online.

However, the Sun named him today and other news outlets followed.

Harris, an enduring family favourite who was made a CBE in the 2006 Queen’s birthday honours, is one of 12 people arrested under Operation Yewtree, the national investigation prompted by allegations against Savile.

He was interviewed under caution on November 29th last year, five days after a search warrant was executed at his home in Berkshire.

The Australian-born entertainer was also appointed Officer of the Order of Australia in the Queen’s Birthday Honours list last year. He was recognised for his service to the performing and visual arts, to charitable organisations and to international relations through the promotion of Australian culture.

His hits include Tie Me Kangaroo Down Sport and Two Little Boys, and he also painted an official portrait of the queen for her 80th birthday.

After his arrest in March, just days before his 83rd birthday, a Scotland Yard spokesman said: “An 82-year-old man from Berkshire was arrested by officers on Operation Yewtree on suspicion of sexual offences.

“He has been bailed to a date in May pending further inquiries. The individual falls under the strand of the investigation we have termed ‘others’.”

Harris is among a number of high-profile figures from the entertainment industry who have been arrested as part of Operation Yewtree.

The claims against Harris are not linked to Savile. Scotland Yard has refused to reveal any details of the allegations against him.

A total of 12 people have been arrested so far under Yewtree, including former pop star Gary Glitter, DJ Dave Lee Travis, comedians Freddie Starr and Jim Davidson, and PR guru Max Clifford. All deny any wrongdoing.

Travis and Davidson were both arrested and later re-arrested after further allegations were made. They have also maintained their innocence throughout.

Travis said that he strongly denied any wrongdoing, he had co-operated with the police and his “conscience is clear”.

Davidson’s solicitor Henri Brandman said the allegations against his client dated back several years, were made by complainants who were adults at the time and the comedian “vigorously denies” their claims.