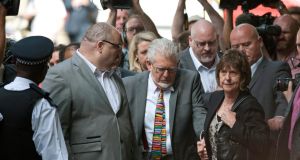 Rolf Harris has been jailed for five years and nine months for a string of sex crimes involving four girls.

The 84-year-old entertainer, a family favourite for decades, was finally unmasked as a prolific paedophile with his conviction for 12 indecent assaults on Monday.

Today, at London’s Southwark Crown Court, Mr Justice Sweeney told the shamed performer he had shown no remorse, and his reputation was now in ruins.

Harris was unanimously found guilty of molesting four girls - one who was just seven or eight and was groped when she asked for his autograph, and another two who fell prey as young teenagers.

The veteran presenter, who charmed television audiences for decades, was also convicted of a catalogue of abuse against his daughter’s then-best friend, whom prosecutors said Harris groomed from the age of 13 and used like “his little toy”.

The accusations dated back to between 1968 and 1986, and the girls were targeted between the ages of seven or eight and 19.