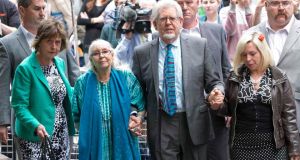 Entertainer Rolf Harris leaves with his niece Jenny, wife Alwen and daughter Bindi from Southwark Crown Court in London today after being found guilty of 12 charges of indecently assaulting young girls over a period of nearly 20 years. Photograph: Neil Hall/Reuters 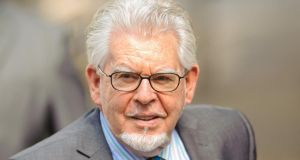 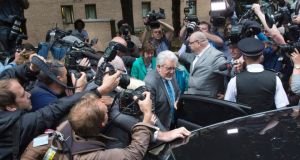 Veteran entertainer Rolf Harris saw his decades in the spotlight end in disgrace today as he was found guilty of indecent assault.

The 84-year-old, once a much-loved artist and musician, was convicted at Southwark Crown Court of 12 sex charges involving four women.

His army of supporters, including suited security guards and representatives from PR giant Bell Pottinger who attended every day of the trial, could do nothing to change the verdict of the jury of six men and six women.

Once seen by a UK audience as a national treasure, Harris had enjoyed years of success, netting him a multi-million pound fortune and the chance to paint the queen.

But the downfall of an entertainer who was part of millions of British childhoods came today, as Harris became the biggest scalp claimed by detectives from high profile sex crime investigation Operation Yewtree.

The assaults took place between 1968 and 1986 and involved girls and women ranging in age from 7 to 19, a spokesman for the Crown Prosecution Service said.

Dozens more alleged victims have come forward during the trial, including several in Australia, and Scotland Yard has been in touch with their counterparts in the Australian police, but it is not yet clear whether they are pursuing any investigation in Harris’s home country.

The NSPCC said it has received 28 calls relating to Harris to date, involving 13 people who claim they fell prey to the performer.

Harris remained impassive as the forewoman delivered the unanimous verdicts.

His daughter Bindi Nicholls held hands with a fellow supporter, and wife Alwen and niece Jenny also watched from the public gallery as his fate was sealed.

The performer was released on bail until Friday when he will be sentenced.

Justice Sweeney warned the 84-year-old that given the conviction on all 12 counts it was “inevitable” that a custodial sentence would be possible.

During the trial, the court also heard from six other witnesses who claimed they had been groped by Harris, but were not part of the criminal charges.

The first claimed she was 11 or 12 when she was off sick from school at a family friend’s home in 1969, when Harris told her “I want to be the first person to introduce you to a tongue kiss”.

He then allegedly got her in “a gentle hug” before sticking his tongue into her mouth.

A second, then aged 16 or 17, was waitressing at an event in New Zealand in 1970 when she claimed the entertainer put his hand on her bottom and between her legs.

She said: “I saw the dark side of a man who I thought could be trusted.”

The third supporting witness was aged 18 when she was on holiday in Malta in 1970 when her boyfriend cut his foot while swimming in the sea and Harris helped them to find a doctor.

She claimed that after she went back to thank the artist, he pinned her up against the wall in a back room in a bar, kissing and groping her.

Jurors also heard from a make-up artist who claimed Harris had groped her more than “two dozen” times in a single day.

It was alleged that the entertainer repeatedly put his hands inside the freelancer’s baggy denim shorts as far as her hips while making a television programme in Australia in the mid-1980s.

The woman, then in her 20s, told the court that she later found out Harris’s nickname was “the octopus”.

She said she complained to her female supervisor: “That dirty old man groped me all day. I’m really pissed off.”

A mother and daughter claimed that Harris targeted them both on the same day when they met him at a promotional event at a shop in Australia in 1991.

It was alleged that he first groped the 15-year-old daughter after insisting on giving her a hug, and then rubbed himself against her mother’s bottom as they had their photograph taken.

When the older woman challenged him, calling Harris “a disgusting creature”, he is claimed to have said: “She liked it”, referring to her daughter.

Harris is the latest aging celebrity to be tried in the UK over sexual-assault allegations. Publicist Max Clifford was found guilty in April of indecent assault charges dating back as far as 40 years, while soap star Bill Roache and former BBC disc jockey Dave Lee Travis were acquitted earlier this year.

Harris, who has been honored three times by the queen, was the host of UK television programs including Animal Hospital on the BBC in the 1990s and wrote songs such as Tie Me Kangaroo Down, Sport.