Q&A: What are the DUP talking to Theresa May about?

Arlene Foster’s party want power but have a shopping list 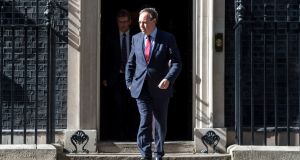 Why are the DUP meeting Theresa May this week?

After calling a snap election to improve her party’s majority, only to see it obliterated, the prime minister now needs the support of the Democratic Unionist Party (DUP) to form a government. The DUP are keen to be in power but they don’t come free. Hence the negotiations.

What do the DUP want?

It is understood Arlene Foster’s party have a shopping list covering largely socio-economic concerns. For the most part, sectarian issues such as Orange parades and how to deal with legacy issues from the Troubles are off the table for now.

The bulk of the talks will revolve around Brexit. Both parties are in favour of leaving the EU although the unionists want protection from the more dramatic consequences such as leaving the single market and the establishment of a hard border between Ireland and Northern Ireland. This could be a sticking point for May who has indicated support for a “hard Brexit”, although her recent election drubbing may have softened her cough somewhat.

Foster will also seek some protection from British soldiers for their actions during the Troubles and will demand IRA members will not be officially designated as victims.

Many of the DUP demands are more traditional. They will get a large increase in investment from the mainland, particularly in hospitals and schools, and the scrapping of the bedroom tax and the TV licence.

What do the Conservatives want?

To get back into government. The Conservatives are not in a position to demand much and will be hoping to escape from the talks without making too many concessions. The talks may even offer May an excuse to row back on some of her more unpopular campaign promises, including perhaps seeking such a hard Brexit.

So the Conservatives and the DUP will form a coalition?

No. The plan is for a confidence and supply agreement similar to the one in operation in Leinster House which allows a Fine Gael minority government to exist with the co-operation of Fianna Fáil. Under the agreement, the 10 DUP MPs will agree to support the government in votes that are vital to its survival in office. In return, the DUP gets some of its policies enacted but will not get any seats at the cabinet table.

A date for the queen’s speech has been set. Will this affect the talks?

The negotiations are reported to be progressing well, although it is likely to be early next week before an agreement is finalised. The government announced on Thursday, however, that the queen’s speech, which outlines its legislative agenda, will go ahead next Wednesday having been already postponed once. It is not clear what elements this agenda will include from the DUP side. Nigel Dodds, in Downing Street for talks with Mrs May on restoring power-sharing in Northern Ireland on Thursday, refused to be drawn on how negotiations were progressing. “We are working on a series of fronts and we are working very, very hard to deliver good government for Northern Ireland and good government for the United Kingdom,” he said. One person is not happy about the delay. Queen Elizabeth will have to miss the start of the Royal Ascot race meeting to attend the speech.

How will the outcome affect the Brexit negotiations?

Negotiations between Britain and the EU are to start on Monday. The recent election has caused turmoil on the British side. Their negotiators have still to send their basic position papers to Brussels ahead of the talks.

When the talks get started, it is not clear to anyone what positions the UK government will take. There have been some mumblings that they are ready to abandon the “no deal is better than a bad deal” rhetoric.

What does this mean for Ireland?

A deal between the DUP and Conservatives will present headaches for the Irish Government but there may be a silver lining. The DUP is pushing for no hard border with the south, something that would be disastrous for both countries’ economies. This has been one of the main aims of the Irish Government since the Brexit vote.

On the other hand, the Irish Government also wants special status for Northern Ireland within the EU to be recognised. This would allow Northern Ireland to immediately rejoin the EU if it voted for unity with the 26 counties. Needless to say, the DUP is completely opposed to special status because it would imply it is different from other parts of the UK.