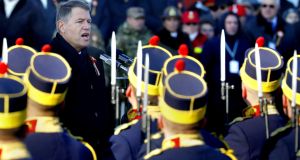 Romanian president Klaus Iohannis has called for a renewed fight against corruption, as his battle with the country’s scandal-plagued government clouds preparations for its first EU presidency.

Romania’s six-month tenure starting in January is expected to include oversight of Brexit, hard-fought elections to the European Parliament and talks on a new long-term budget for the bloc.

Although most of the rotating presidency’s tasks are organisational, top officials in Brussels are concerned that the bitter struggle between Mr Iohannis and Romania’s populist government could distract from EU matters at hand.

Mr Iohannis and many compatriots oppose the government’s overhaul of Romania’s criminal justice system, its decriminalisation of certain graft offences and its successful campaign to remove the country’s top anti-corruption prosecutor.

Critics say the reforms favour powerful members and backers of the ruling Social Democrats (PSD), and they have triggered the biggest street protests seen in Romania since its 1989 anti-communist revolution, including a rally in August during which about 450 people were hurt in a crackdown by riot police.

“Corruption is a disease that eats away at democracy and traps millions of people in poverty,” Mr Iohannis said on Sunday.

“Corruption means a lack of motorways, insanitary hospitals, underfunded schools, blocked administration ... Honesty and integrity must be reinstated at all levels of our society.”

The European Union and United States have raised serious concerns over Romania’s recent reforms, and Brussels still conducts special monitoring of its judicial system and anti-corruption efforts, 11 years after it joined the bloc.

Critics say the reforms will favour PSD leader Liviu Dragnea, who cannot serve as premier after being convicted of vote rigging and abuse of office, and so instead guides prime minister Viorica Dancila’s government from behind the scenes.

Mr Iohannis responded on Friday by saying that “de facto Romania does not have a prime minister” because the government was “run by the criminal Dragnea through intermediaries” and that the PSD sought to rule through decree rather than negotiation.

The fractious PSD has replaced three premiers in two years after they clashed with Mr Dragnea, and a cabinet reshuffle last month claimed six ministers following a fresh power struggle; opposition parties are discussing holding a vote of no confidence in the government this week.

In late October Ms Dancila said European Commission president Jean-Claude Juncker had called for a “truce” between Romania’s government and opponents, to meet what she called the “need for consensus, for calm, for political disputes to take second place so we can focus on the national interest”.