London Letter: Light to be cast on tactics used during 1984 strike that led to violent clashes 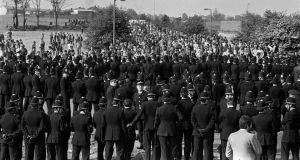 The Battle of Orgreave in June 1984 was one of the most violent clashes of the miners’ strike and among the worst examples of police misconduct in recent British history. For decades, campaigners have called for a full inquiry into how the police behaved on the day, how they concocted evidence later and whether the entire confrontation had been deliberately set up by the authorities.

Now, according to a report in the London Times, Theresa May’s government is about to agree to such an inquiry, the terms of which are expected to be announced later this month. The move follows last year’s decision by the Independent Police Complaints Commission that South Yorkshire Police should not be investigated because the passage of time meant allegations of assault and misconduct at the plant could not be pursued.

The force is already under pressure over its handling of child abuse in Rotherham, when it did too little, and its investigation of sexual abuse allegations against Cliff Richard, when it may have been overzealous. South Yorkshire Police were on duty during the Hillsborough disaster in 1989 and there have been persistent claims they employed the same tactics against Liverpool football fans that day as they had against the miners at Orgreave.

During the 1984 strike, police had usually prevented such pickets from converging by blocking them along the way but the pickets arrived at Orgreave without difficulty. They were allowed to assemble close to the cokeworks before police moved them into an open field, where they were surrounded by 4,500 officers.

When the first strike-breaking lorries appeared, the striking miners pushed forward against police lines. But instead of resisting, the lines parted to allow mounted police to charge the miners, who responded by throwing stones. When the BBC showed this scene on television later, it reversed the sequence, so that it appeared the mounted charge was a response to the stone-throwing.

“Short shield” police units moved in, bludgeoning miners over the head and body with truncheons, sometimes wearing boiler suits rather than police uniforms and having removed their identification numbers. Some 95 miners were arrested and most were charged with riot, an offence that carried a life sentence, but all the cases collapsed after police evidence was found to be unreliable. Many police officers signed statements which used almost identical language, and one signed a statement written in somebody else’s handwriting.

“The coke was of no interest whatsoever. We didn’t need it. It was a battleground of our choosing on grounds of our choosing . . . The fact is that it was a set-up and it worked brilliantly,” he said in 1993.

Nick Timothy, one of May’s closest advisers and now the prime minister’s chief of staff, called earlier this year for an inquiry into Orgreave, arguing it would be consistent with May’s belief in Sir Robert Peel’s dictum “the police are the public and the public are the police”. As home secretary, May had frequent confrontations with the police, over stop and search, deaths in police custody and uncovering the truth about Hillsborough.

Timothy anticipated the opposition of some Conservatives to an inquiry into Orgreave and their call to let sleeping dogs lie. “But the Hillsborough Independent Panel inquiry showed that sleeping dogs in South Yorkshire Police lied, lied and lied again, not just about their own conduct but about the victims and other football supporters,” he wrote in Conservative Home. “If we want to prevent that from happening in future, if we want to make sure the police are above corruption, collusion and cover-ups, we need to know when and how these things have been allowed to happen in the past.”