The sister of Britain’s Duchess of Cambridge’s, Pippa Middleton, has married one of the UK’s most eligible bachelors, millionaire groom James Matthews. 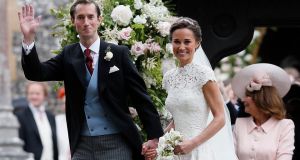 The sister of Britain’s Duchess of Cambridge’s, Pippa Middleton, has married one of the UK’s most eligible bachelors, millionaire groom James Matthews.

Ms Middleton was accompanied by her father, Michael, when they pulled up to St Mark’s Church in the quiet Berkshire village of Englefield, shortly after 11.15am.

The bride wore a bespoke Giles Deacon dress, which was crafted to create the impression of being seamless. The dress was teamed with a Stephen Jones veil, a Maidenhair Fern tiara, and Manolo Blahnik ivory satin shoes.

The groom, brother of former Made In Chelsea regular and reality television personality Spencer Matthews, arrived shortly before the bride.

The couple exchanged vows in the picturesque church before a congregation which includes the Duke and Duchess of Cambridge, their children Prince George and Princess Charlotte, Prince Harry and other close family and friends.

The event has seen hundreds of royal fans, press and public descend on the quiet village, near Reading.

Guests included tennis champion Roger Federer and his wife, Mirka, who walked past 100 members of the waiting press and media camped out a short distance from the church.

Pippa’s controversial uncle Gary Goldsmith said hello to the waiting press as he entered, while Princess Eugenie was among the first royals to arrive.

It is six years since Pippa Middleton came to public attention as a bridesmaid at the wedding of her sister to the Duke Cambridge, Prince William.

Her dress was constructed with a cap sleeve, high neckline and featured a corseted bodice with draping to the front and heart-shaped detail at the back. The bespoke silk cotton lace was hand appliqued to create the impression of having no seams. Mr Deacon said the lace bodice was embroidered with pearl detailing over an organza and tulle underskirt, which had layer upon layer to enable a floor sweeping movement. He said: “It’s a privilege to show the craftsmanship that my team produces in London and a real testament to Pippa’s support of British fashion.”

The bride wore a bespoke veil, designed by Stephen Jones, made from fine tulle with a degrade of embroidered pearls. The Maidenhair Fern tiara with matching hairpiece was handmade by Robinson Pelham. The shoes were a Manolo Blahnik pump, in an ivory satin with bespoke pearl detailing.