Broadcaster says treatment of investigation into singer an ‘error of judgment’ 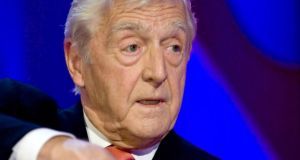 Michael Parkinson: “I think the Cliff Richard case only highlights the feeling there is some kind of witch hunt going on.” Photograph: Brian J Ritchie/Rex Features

Former BBC journalist Sir Michael Parkinson has described the corporation’s handling of the police investigation into singer Sir Cliff Richard as an “error of judgment” that “would have done the red tops credit”.

Sir Michael called for greater protection of people’s anonymity until they are charged.

The veteran TV host also criticised the media as a whole for its wider reaction to news that appears on social media, calling for it to be more responsible in how it handles such information.

Criticising media reporting of the search at Sir Cliff’s home, he told ITV News: “I just think that it’s wrong. I think anybody not charged should not be named by the police and shouldn’t be reported in the newspapers either.

“I think the Cliff Richard case only highlights the feeling there is some kind of witch hunt going on.

“I think the BBC did create an error in judgment – not in understanding the story and having the story and trying to follow it through – but in reacting to the story in a kind of way that would have done the red tops credit.

“That’s what wrong with the BBC, I think, on this one. It was the manner in which they chose to actually cover the event – if you can call it an event.

“I think there is a lot to be looked at and a lot to be learned from all that’s been happening around that particular kind of area.”

Sir Michael cited the case of Rolf Harris, who lived near him in Bray, Berkshire, as another situation in which the media arrived at his home before police.

“It’s not right. Particularly at that point; he was not charged with anything.

“I just feel that they should tread more softly and we should be more considerate of everybody’s feelings and claims and rights in this.

“We should pursue people, of course, who have done wrong. That is indisputably the police’s job.

Sir Michael was scathing of the “social network”, calling it “a urinal with writing on the wall”, saying that because he does not use social media, he was unaware of rumours circulating about Sir Cliff.

“That’s had a detrimental part to play, too, in the way we absorb our news and the way that the media follow through.

“Because it’s there they feel they ought to react to it, well not really, not if it’s against the spirit of things and, indeed, against the law.”