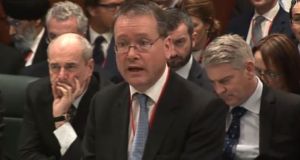 Northern Ireland attorney general John Larkin speaking at the UK supreme court on the second day of a hearing to decide whether or not parliamentary approval is needed before the British government can begin Brexit negotiations . Photograph: AFP/Supreme Court/Getty

The principle of consent in the Belfast Agreement applies solely to Northern Ireland’s place in the United Kingdom, and not to European Union membership, the North’s attorney general has told Britain’s supreme court. John Larkin said that the 1998 Northern Ireland Act, which he described as “effectively a constitution” had no bearing on Britain’s decision to withdraw from the EU.

“No provision in the Northern Ireland Act purports to limit – or has the effect of limiting – the powers of the UK government in international affairs,” he said.   Mr Larkin was speaking during the second day of arguments before the court about whether Theresa May’s government needs MPs’ approval before triggering article 50 of the Lisbon Treaty, which starts formal Brexit negotiations. The court is also considering interventions from the Scottish and Welsh governments and two cases from Northern Ireland, which argue that the Stormont Assembly should have a say before the start of formal talks to withdraw from the EU.

Scotland’s advocate general, Richard Keen, told the court that, although there was a convention whereby the Westminster parliament did not legislate on matters which were devolved to Scotland, Wales and Northern Ireland, the convention was no more than a self-denying ordinance.

“The correct legal position is that parliament is sovereign, and may legislate at any time on any matter,” he said.

The government appealed to the supreme court after Gina Miller, a businesswoman, and Deir Dos Santos, a Spanish-born hairdresser, successfully argued in the high court that MPs must approve the triggering of article 50 because leaving the EU would remove rights conferred on British citizens when parliament voted to join the common market in 1972.

David Pannick, representing Ms Miller, said the government had no answer to her case that triggering article 50 without parliamentary approval would unlawfully destroy the rights of British citizens. He said that last June’s referendum was merely advisory and that, in drafting the legislation which authorised it, the government had resisted numerous opportunities to make the vote legally binding.

“The government resisted an amendment to give legal force to the referendum. If parliament meant the 2015 Act to have legal effect, it could and it would have said so,” he said.

Lord Pannick said that, because the 1972 European Communities Act brought Britain into the EU, another act of parliament was needed to take it out.

“However flexible our constitution, it cannot be bent so that ministers through the exercise of the prerogative can take away that which parliament has created,” he said.