Nigel Farage resigns as Ukip leader: ‘I want my life back’

Leave side victory ‘means political ambition has been achieved’

Nigel Farage says he is stepping down as leader of UKIP, after Britain voted to leave the European Union. Video: Reuters 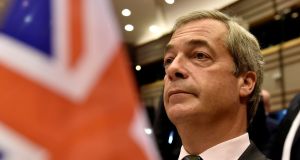 Nigel Farage, the leader of the United Kingdom Independence Party, attends a plenary session at the European Parliament on the outcome of the “Brexit” in Brussels, Belgium, June 28, 2016. Photograph: Reuters

Nigel Farage has resigned as leader of the United Kingdom Independence Party, declaring that last month’s vote for Brexit meant his job was done. Mr Farage said that, although he is leaving the leadership, Ukip itself would continue to play a role in British politics.

“The victory for the Leave side in the referendum means that my political ambition has been achieved. I came into this struggle from business because I wanted us to be a self-governing nation, not to become a career politician,” he said.

Mr Farage’s departure means that three parties represented at Westminster – the Conservatives, Ukip and the Greens – will have new leaders by September. Labour leader Jeremy Corbyn is likely to face a leadership challenge unless he resigns, following a vote of no confidence backed by 80 per cent of the party’s MPs.

Douglas Carswell, Ukip’s only MP, on Monday ruled himself out for the leadership and another prominent figure, former deputy leader Suzanne Evans, said she was ineligible because she was currently suspended from the party. Mr Carswell, who has been a forthright critic of Mr Farage’s leadership, responded to the news of his resignation by tweeting an emoji of a smiley face.

Mr Carswell said Mr Farage’s rhetoric during the referendum campaign had gone too far in seeking to play on people’s fears about immigration.

“It’s not just morally wrong, it’s electorally disastrous. This is a decent, generous country. People have a legitimate right of feel a sense of anger with their politicians but the answer to that is not to play on people’s fears and anger but to promise the hope of something better. I never want to be in a party where the archbishop of Canterbury feels compelled to criticise some of the things that people say,” Mr Carswell told the BBC.

Mr Farage said Ukip was in a strong position to attract votes from Labour supporters who backed Brexit and from Conservatives who are concerned that the government will not follow through on fully withdrawing from the EU.

“Ukip is in a good position and will continue, with my full support, to attract a significant vote. Whilst we will now leave the European Union, the terms of our withdrawal are unclear. If there is too much backsliding by the government and with the Labour party detached from many of its voters then Ukip’s best days may be yet to come,” he said.

Mr Farage declined to endorse a successor but likely frontrunners include MEPs Paul Nuttall, Steven Woolfe and Diane James. Mr Farage said he would continue to serve as an MEP until the end of the current European Parliament or until Britain actually leaves the EU.

“I will support the new leader. I will watch the re-negotiation process in Brussels like a hawk and perhaps comment in the European parliament from time to time,” he said.

“During the referendum campaign I said I want my country back, and I’m saying today I want my life back. And it begins right now.”

1 More than 30 people queue overnight to secure property in Carlow
2 Coronavirus: Further 430 cases reported in State most in a day since April
3 Gardaí appeal for information on rape of teenager in Co Mayo playground
4 Man with electric scooter who died in Meath was due to get married in the coming weeks
5 Traffic volumes show Donegal locking down to greater extent than Dublin
Real news has value SUBSCRIBE