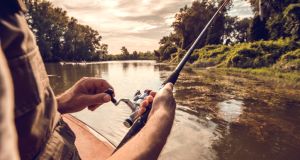 Fishermen found the bomb in a river but by the time officers arrived it was gone. Photograph: iStock

Police fear someone may have taken an explosive shell home with them after finding it on a wall in the UK.

An urgent warning has been issued after the wartime ordnance was discovered in Dartford, Kent.

The potentially dangerous item was found in a river by a fisherman but, after being left on a wall, it then disappeared before police attended.

Now officers are keen to find out what happened to it and ensure it is handled safely.

Kent Police Inspector Shona Lowndes said: “Explosives experts have not yet had the opportunity to inspect and assess whether this item is harmless or poses any dangers.

“We cannot discount that someone may have picked it up and perhaps taken it home or left it somewhere else.

“Anyone who has had contact with this item, or knows of its whereabouts, is urged to contact police immediately.”

Kent Police were called to the area at 5.40pm on Sunday.

The Explosive Ordnance Disposal Unit was also notified and, after viewing a video, believed the object may be a wartime shell.

It is cylindrical, about  1m long, and was left in a location near the river until officers arrived, police said.

Officers attended at 5.52pm and could not locate it, despite extensive checks at the scene. – PA