Klopp thankful for clinical Salah as Watford blow their chances 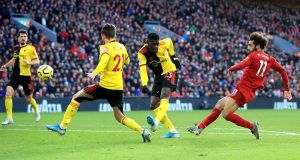 But he then paid a deserved compliment to the fighting spirit shown by the club at the bottom of the table.

“You would not expect in a game against Watford with the set-up that we have that we score both our goals on the counterattack,” the Liverpool manager said, fairly enough.

Nigel Pearson saw it a little differently, bemoaning the fact that after more than half an hour of doughty defending his Watford side were undone by a breakaway from one of their own set pieces, though even by that stage the visitors had created more scoring opportunities than the team now leading the league by a double-figure margin.

The clichéd consensus was that no one would ever have guessed the two sides were separated by the entire length of the league, such was the tightness of the contest and open nature of the game until Salah scored his second in the final minute. Although Pearson needs points rather than praise that can only reflect well on his brief contribution to the Watford cause.

Yet it was not hard to spot precisely why the two sides are where they are in the table. Liverpool created few chances yet took the ones that did arrive with some aplomb, Salah’s first goal in particular being an object lesson in how to make the most of the merest glimmer of an opening.

Watford, by contrast, had glorious opportunities either side of Salah’s opening goal, and missed them both embarrassingly. All Abdoulaye Doucouré could manage was an air shot when a good combination between Ismaïla Sarr and Étienne Capoue left him with a clear sight of goal from close to the penalty spot.

It was from the corner Liverpool conceded that an improvised but effective Roberto Firmino pass allowed the home side to break away and score, Salah cutting in from the left to make space for a measured right-foot finish.

That is the sort of luck you get when you are top and bottom of the league respectively, but just minutes later when Sarr made an even bigger mess of a Gerard Deulofeu cross palmed straight to him by Alisson in the Liverpool goal it was clear the Watford manager was struggling to keep his deadpan expression under control.

The natural reaction would have been a roll of the eyes or an open-mouthed stare of disbelief, but the man charged with restoring Watford’s battered self-esteem is aware he is treading on eggshells.

“I don’t want to further dent my players’ confidence by being over-critical,” Pearson said afterwards. “But clearly we might have got a better reward had we been able to take the chances we created.”

In the circumstances it might be inappropriate for Anfield to go overboard celebrating its first clean sheet of the campaign. Watford found space down both flanks with surprising ease, and with any sort of composure in front of goal might have produced one of the shocks of the season.

Until Salah made sure right at the end, scoring with a nonchalant flick of the heel after finding himself on the end of Divock Origi’s wayward shot, Liverpool supporters were practically biting their nails for the first time in months.

It really was that close, though in fairness it might not have been had not VAR intervened to rule out a handsome Sadio Mané goal at the start of the second half for the usual microscopic reasons.

“It was not an off day, it was just a difficult game,” Klopp said, skating over the obvious fact that it would have been a lot more difficult had Watford not been afflicted with an aversion to putting the ball in the net. That is something for Pearson to be working on while Klopp and his players are out in Qatar.

When Liverpool return from the Club World Cup they face Leicester City at the King Power Stadium on St Stephen’s Day, a fixture that the league table would suggest might be the toughest of the festive period.

Klopp’s defenders will need to sharpen up, because Jamie Vardy and the Foxes are unlikely to be anywhere near as forgiving as the hapless Hornets.