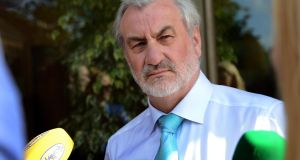 Early in 2010, Ireland was in the depths of the economic crisis, with pay cuts for 300,000 public servants. A quarter of a century of social partnership had collapsed.

Shortly afterwards, his phone rang. An irate cabinet minister berated Mulvey – a civil servant, yet one holding an independent office – demanding to know on what authority he had acted.

The row was but one example of a fine line frequently walked. Recently, the Department of Public Expenditure was unhappy over his suggestion that the Lansdowne Road pay deal might need to be reopened.

Yesterday, he retired after nearly a quarter of a century as the country’s foremost industrial relations trouble-shooter, a role that has made him a familiar face on TV screens.

Reflecting on his career, Mulvey believes his 2010 intervention was “high-risk” but ultimately justified because it helped to lead to the Croke Park deal – which led to the Haddington Road and Lansdowne agreements.

“There was political opposition to that at the time. Not from Brian Cowen, but one or two of his cabinet ministers who felt that unilateral government in the area of pay was a good idea. They had already done it in relation to the [public service] pension levy.

“But I could see a situation developing where hospitals, schools, local authorities and the public services including the Civil Service were going to grind to a halt and we would get to Greek-type-proportion disputes.

“That was on the cards in 2010. It was a risky strategy but it stabilised the economy at the time,” said Mulvey. The troika believed it helped to stabilise industrial relations in ways that did not happen in other countries, he added.

Though he is leaving the Workplace Relations Commission, Mulvey believes its independence is crucial and his successor – interviews are in the works – must be free to “call the situation” as they see it.

Sometimes, he had to tell ministers desperate for a solution to a strike to trust his judgment: “I had occasional flashpoints with some ministers where I felt an intervention would be wholly inappropriate. But that is understandable,” he recalled. Several years ago, he warned economic recovery would bring greater expectation among workers after seven years of pay cuts, retrenchment of terms and conditions and increased taxes. That has now occurred. Increasing militancy is now evident. Some shop stewards have a strong antipathy towards the establishment, whether the Government or their own union leaderships.

Some strikes were now threatened “at the drop of a hat”, with insufficient efforts made to nip crises in the bud, he believed. “To some degree the militancy, frustration or volatility is out of sense of frustration.”

However, he warned the Workplace Relations Commission and the Labour Court must not be undermined as the main planks in the State’s industrial relations machinery.

“I would worry about a revolving door of industrial relations. If people feel there is an alternative place to go they will gravitate towards it. Employers and unions would keep going until they get the result that suited them.”

However, full, immediate restoration of public service pay is unrealistic, he argued. “You could have maybe a phased restoration around negotiated pay rounds over a period.”

Equally, the commission deals with complex cases. “You are also working sometimes with a multiplicity of unions who are sometimes in different rooms with their own different agendas. That is why sometimes it takes so long.”

Looking back, Mulvey remembers highlights: the Waterford Crystal pensions deal and the Aer Lingus rescue after the 9/11 attacks in 2001. Without the intervention of the Labour Relations Commission, the airline would have gone to the wall, he believed.