Johnson criticised for refusing to sack his adviser Cummings

British PM accused of undermining his own government’s coronavirus advice 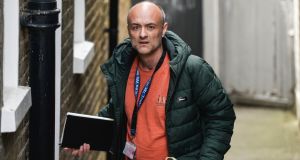 Boris Johnson was accused this evening of undermining his government’s coronavirus advice after he refused to sack his adviser Dominic Cummings for breaking lockdown rules. Stephen Reicher, a member of the government’s advisory group on behavioural science, said people were less likely to follow the guidance if they believed it did not apply to everyone.

“In a few short minutes tonight, Boris Johnson has trashed all the advice we have given on how to build trust and secure adherence to the measures necessary to control Covid-19,” he said.

Eleven Conservative MPs have called for Mr Cummings to be sacked after it emerged that he drove almost 270 miles from his London home with his wife and their four year-old son to his parents’ house in Durham in late March.

Mr Johnson used a Downing Street press conference to offer his full backing to Mr Cummings, saying he had acted responsibly, legally, and with integrity.

“I have concluded that in travelling to find the right kind of care at the moment when both he and his wife were about to be incapacitated by coronavirus, and when he had no alternative, I think he followed the instincts of every father,” the prime minister said.

Mr Johnson did not address reports that Mr Cummings visited a castle outside Durham during his self-isolation and that he returned to the city from London a week later.

Labour leader Keir Starmer said Mr Johnson was treating the public with contempt, adding that he would have sacked Mr Cummings.

“The public will be forgiven for thinking there is one rule for the prime minister’s closest adviser and another for the British people. The prime minister’s actions have undermined confidence in his own public health message at this crucial time. Millions were watching for answers and they got nothing,” he said.