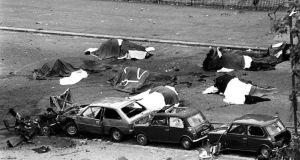 The Irishman charged with killing four British army soldiers in the IRA  Hyde Park bombing in London in 1982 has been remanded in custody by the Old Bailery.

John Anthony Downey (61), Creeslough, Co Donegal was on his way to Greece for a holiday when he was detained last Sunday after he had disembarked from a flight at Gatwick.

On Wednesday, he was charged with four counts of murder and one of conspiracy to cause explosion.

Mr Downey, who is a long-standing member of Sinn Fein, appeared by videolink from Belmarsh Prison in East London before Mr Justice Sweeney at the Central Criminal Court in the Old Bailey.

No application for bail was made by Mr Downey’s solicitor, Gareth Pierce.

Mr Justice Sweeney ordered that he be remanded in custody until a hearing, also at the Old Bailey, on June 5th.