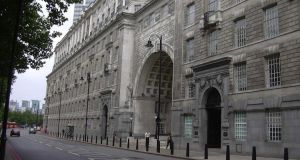 Thames House in Millbank, London. The headquarters of MI5 since December 1994.

A legal bid by IRA informer Martin McGartland, who claims that British intelligence agency MI5 failed to properly protect him after he was exposed, must be heard in secret, the Court of Appeal in London has ruled.

The ruling means that the Belfast-born McGartland, now aged 43 and still living under an assumed identity, and his legal team will not be able to see, or hear all of the evidence the British government puts before the judge hearing his case.

McGartland’s account of his time as an agent inside the IRA between 1987 and 1991, “Fifty Dead Men Walking” was later turned into a film, which recounted a series of IRA attacks that he prevented by tipping off the Royal Ulster Constabulary and MI5.

Following the IRA’s discovery that he was an agent he fled to the northeast of England, where he lived under a false identity until 1999 when he was tracked down and shot seven times in an attack that he blames upon the IRA.

In its ruling, the Court of Appeal said that McGartland argues that his security was “compromised by errors” made by British police and security and that he has not received money which he was promised.

His long-term partner, Joanne Asher, who is joined in the legal action, claims that she has been caused distress and impairment to her mental health by the same events.

In line with long-standing policy, the British government has refused to confirm or deny whether McGartland was an agent and argued that the case had to be held in secret.

The High Court previously ruled that Home Secretary Theresa May is entitled to have the option of having a secret trial – more properly known as “closed material proceedings” – when McGartland’s case is heard.

In his ruling at the Court of Appeal, Lord Justice Richards said “the reality” is that the judge who finally hears McGartland’s case will “scrutinise with care” the Crown’s arguments for having material heard in secret.

“In relation to all the material sought to be withheld, consideration can be given to the question whether disclosure could be made to the claimants and their open representatives without damage to the interests of national security.

“If, for example, the court concludes that otherwise sensitive material could be disclosed to the claimants and their open representatives on terms as to confidentiality and/or hearings in private without damage to the interests of national security, then the court can be expected to refuse permission for the material to be withheld to that extent, whilst still giving permission for it not to be disclosed on any wider basis,” he ruled.

Legislation clearing the way for secret trials was brought into action two years, following arguments by the intelligence agencies that some intelligence could not be aired in court without compromising sources.

In McGartland’s case, the Court of Appeal ruled that the court hearing his case can still decide to hold a public hearing, if it comes to the conclusion that a secret one is “no longer in the interests of the fair and effective administration of justice”.