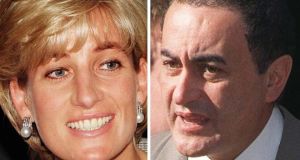 An inquiry into the deaths of Diana Princess of Wales and Dodi Fayed (pictured) and driver Henri Paul has found no evidence that they were murdered. Photograph: PA/PA Wire.

The SAS was not involved in the deaths of Diana, Princess of Wales, and Dodi Fayed, Scotland Yard has said.

It emerged in August that the police were looking at claims that the couple were murdered by a member of the British military.

But in a statement today the force said there was “no credible evidence” of any SAS involvement in their deaths, and that there was no evidence on which to open a criminal investigation.

It was understood the allegation was made by the former parents-in-law of an ex-soldier, based on information that he talked about in the past. It is believed the information was passed to the Metropolitan Police through the Royal Military Police.

An official police report into the allegations is due to be published today. Scotland Yard said that officers had conducted a “scoping exercise” to assess the “relevance and credibility” of the information provided, and to decide whether it was sufficient to warrant a reopening of the criminal investigation.

The force said: “This assessment included taking statements from a number of individuals and reviewing records. As part of the scoping officers were given unprecedented access to Special Forces Directorate records.

“Every reasonable line of inquiry was objectively pursued in order to fully evaluate any potential evidence...The final conclusion is that whilst there is a possibility the alleged comments in relation to the SAS’s involvement in the deaths may have been made, there is no credible evidence to support a theory that such claims had any basis in fact.

“Therefore the MPS are satisfied there is no evidential basis upon which to open any criminal investigation or to refer the matter back to HM Coroner.”

Mohamed al Fayed, Dodi’s father, was “disappointed but not discouraged” by the outcome, his solicitor Simon McKay said.

He said: “Mr al Fayed will continue his struggle to reveal the truth about the tragedy in Paris which claimed the lives of his eldest son and Princess Diana.

“The so-called scoping exercise by the Metropolitan Police is the latest whitewash in a 16-year cover up.

“The Met should never have been given charge of the case as they had every incentive to return the result we now see. To have done anything else would have called into serious question their own Paget Report of 2007.

“The case of soldier N should have been rigorously investigated by the Royal Military Police.

“It was wrong to put in charge of the scoping exercise an officer Philip Easton who had been an important figure in the Paget investigation, which said the deaths were accidental, a judgement overruled by the jury at the inquests that said that Dodi and Diana had been unlawfully killed.

“Mr al Fayed will continue his fight to establish the truth that they were murdered and is convinced he will succeed in doing so.”

Diana, Dodi and chauffeur Henri Paul died after their Mercedes crashed in a Paris tunnel after leaving the Ritz Hotel on the morning of August 31st, 1997.

The hearing into the deaths of Diana and Dodi lasted more than 90 days, with evidence from around 250 witnesses.

The inquests concluded on April 7th, 2008, with a jury returning a verdict that the ”people’s princess” and her boyfriend were unlawfully killed.

After the hearing, the Metropolitan Police said it had spent £8 million on services arising from the inquest and the Operation Paget investigation from 2004 to 2006.

That money includes the cost of the legal team which represented the force’s commissioner at the inquest, police protection for the inquest jury and paying for the Paget inquiry, reported to have cost £3.6 million.

Former Met Police commissioner Lord Stevens’s Paget investigation was launched in 2004 at the request of Michael Burgess, the Royal Coroner, who was then overseeing the future Diana inquest.

The former top policeman published his report in December 2006, rejecting the murder claims voiced by some, including Dodi’s father Mohamed al Fayed.