‘Imagine what Trump could do to our little country. It’s scary’ 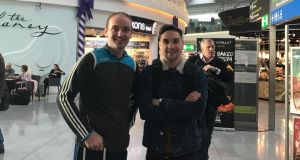 Henry Healy at Dublin Airport with his friend, Greg O’Donoghue, from Ashbourne, Co Meath, on Wednesday morning before flying to the United States for the final days of the US presidential campaign.

Speaking en route to Dublin Airport today, Healy said: “I organised the trip with a few friends – there are five of us going. I suggested we headed to Washington for the election

“I was able to organise through what contacts I’d left to get us a tour of the White House and Capitol Hill. I didn’t let Barack know we were coming. No, I didn’t text him,” he added.

“After Washington we’ll go back to New York on the night of the election, and we’ll be in the convention centre where Hillary Clinton will either give her victory speech or concession speech,” he said.

“Ideally I’m hoping for a Clinton victory. The Clintons are friends of Ireland, and obviously for the stability of world economics you’d hope that Hillary would get in. There is a fear factor surrounding Donald Trump, so hopefully it will be Hillary,” he went on.

“But when you see the polls out today, Trump is gaining momentum. We’re still not four days out since the whole email scandal so we’re not going to see the real effect of the email scandals in the polls for the next couple of days.”

He added: “Nobody really expected people would vote for Brexit. The electorate are a strange breed once they get going. Donald Trump is calling for anyone who has already voted for Hillary to go back and change their votes if they don’t believe in her now – I didn’t even know you could do such a thing.”

“It’s crazy to think [Trump] has got this far and he is now a stone’s throw away from the Oval Office. Hopefully there are rational people out there that will elect Hillary,” Mr Healy said.

He also said he feared a Trump victory could harm Ireland’s fragile economic recovery: “Ireland is such an open economy and we saw what the [2008] collapse of Lehman Brothers did to our banks. Imagine what Trump could do to our little country. It’s scary.”

“If Trump is elected next week the dollar will drop and that’s not going to be good for us. If you believe what Trump says, he will try to pull back the multinationals out of Ireland. He has specifically mentioned Ireland in that light. We might be a small spud on the world map, but he could do us harm.”