Hammond says inquiry to ‘get to the bottom’ of Huawei leak 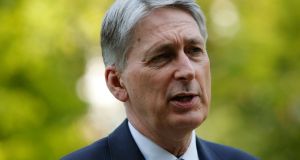 Chancellor of the exchequer Philip Hammond: “It is important that we protect the principle that nothing that goes on in national security council meetings must ever be repeated outside the room.” Photograph: Florence Lo/Pool Photo via AP

Britain’s chancellor of the exchequer Philip Hammond has confirmed that an investigation has been launched to find out who leaked information this week from a meeting of the National Security Council (NSC). He said it was important that the inquiry should “get to the bottom” of the disclosure of the council’s decision to allow the Chinese telecoms company Huawei to build parts of Britain’s 5G network.

“To my knowledge there has never been a leak from a National Security Council meeting before and therefore I think it is very important that we get to the bottom of what happened here,” he said during a visit to Beijing.

“It’s not about the substance of what was apparently leaked. It’s not earth-shattering information. But it is important that we protect the principle that nothing that goes on in national security council meetings must ever be repeated outside the room.”

The NSC is a cabinet committee where ministers, all of whom have signed the Official Secrets Act, have access to secret intelligence from the security service MI5, the secret intelligence service MI6 and the signals intelligence centre GCHQ. The Daily Telegraph reported this week that Theresa May won the NSC’s approval to allow Huawei to help build non-core parts of the 5G network

Mrs May’s cabinet is unusually leaky, with detailed accounts of cabinet meetings reported within minutes by some Westminster political journalists. But former cabinet secretary Gus O’Donnell, who set up the NSC in 2010, said leaking from the committee was “a complete outrage” and beyond the pale.

“This is highly classified material, I used to say to people when you come into the NSC you leave the politics at the door – and you leave your mobile phones at the door, let’s be absolutely clear,” he told the BBC.

“I can understand in a world where we have very divided cabinet over Brexit, we have had a prime minister who has said she is going to go . . . you’ve got these fissions. I can understand that for aspects of cabinet – I deplore it and it makes cabinet government work very badly – but for the National Security Council this is just beyond [that in seriousness]. I thoroughly applaud what my successor Mark Sedwill has done, to say that this is just beyond the pale.”

The United States and other British allies in the “Five Eyes” intelligence sharing alliance fear that Huawei’s close links to the Chinese government makes the company’s involvement in sensitive digital infrastructure projects too risky. But Britain believes it can limit the risk that Huawei will create a “back door” into the 5G network by confining the company's involvement to “non-core” elements of the project.