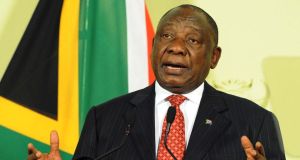 South African president Cyril Ramaphohas been advised to dismissed both lawyers based on the findings of the report. Photograph: SIyabulela Duda/EPA/GCIS/Handout

Two senior lawyers at South Africa’s National Prosecuting Authority (NPA) have been found unfit to hold office by an inquiry that has recommended their dismissal to president Cyril Ramaphosa.

Deputy national director of public prosecutions, Nomgcobo Jiba, and director of the specialised commercial crimes unit, Lawrence Mrwebi, lacked “complete honesty, reliability and integrity” as prosecutors, according to the findings of an inquiry investigating their conduct and credibility.

A report by the three-judge panel led by retired constitutional court justice Yvonne Mokgoro, which was leaked to media on Thursday, found the pair, who have been suspended since October, unfit to hold office on a number of grounds.

The lawyers were investigated after numerous complaints were made against them to the courts down through the years. The complaints related to criminal cases the lawyers were either involved in prosecuting or sidelining.

Both lawyers maintained they had no case to answer when giving evidence at the seven-week inquiry, which heard evidence from 17 witnesses.

In one of the cases, Ms Jiba was found to have “allowed, and in fact enabled, the independence of the NPA to be compromised” in its prosecution for racketeering of retired KwaZulu-Natal province police chief Johan Booysen in 2013.

The racketeering charge was successfully challenged by Mr Booysen in the high court in 2016, which found that Ms Jiba’s decision to charge him was irrational and there was no evidence to support it.

Mr Booysen appeared at the Mokgoro Inquiry in early April, where he testified that attempts were made to remove him from his position, because he was investigating high-profile people connected to former president Jacob Zuma’s son, Edward.

The Mokgoro inquiry also found that Ms Jiba’s integrity had been compromised when she did not recuse herself from a phone-taping case that led to the withdrawal of corruption charges against Mr Zuma. In 2010, the former president pardoned her husband Booker Nhantsi, who was convicted of stealing money from a trust account as an attorney.

The report was also scathing about Mr Mrwebi and his decision to withdraw charges against Richard Mdluli, a former head of police crime intelligence who was accused of corruption in 2011, saying he “did not act with integrity” and did not understand the law.

The way he went about withdrawing charges against Mr Mdluli was irrational and unlawful, stated the report. Among other things Mr Mdluli was facing charges related to defrauding a secret crime intelligence slush fund.

Senior state prosecutor Jan Ferreira, who worked closely with Mr Mrwebi, also told the inquiry earlier this year that Mr Mdluli was protected from prosecution, saying the decision to withdraw the charges against him “made absolutely no sense”.

Mr Ramaphosa has until Friday to decide whether or not to fire the two lawyers.

The Mokgoro inquiry is one of three independent investigations into different aspects of public sector corruption that were launched by Mr Ramaphosa shortly after he took office in February last year.