Grenfell Tower inquiry to begin with tributes to victims

Panel to include two from community after controversy over chairman 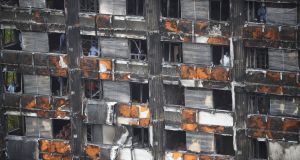 File photograph: Workers stand inside the burnt out remains of the Grenfell tower in London, Britain, where 72 people died. Photograph: Reuters/Hannah Mckay

Eleven months after a fire that claimed 72 lives, the inquiry into what happened at Grenfell Tower begins in London on Monday with tributes to the victims. The tributes will take the form of portraits of those who died, combining video with live testimony and lasting anywhere between a few minutes and more than an hour.

The inquiry, which will hold its first hearings in a hotel conference centre in South Kensington, will not impose a time limit on the portraits or place other restrictions on their content. Counsellors will be on hand for bereaved survivors and a prayer room will be set aside outside the hearing room.

The start of the inquiry follows controversy over the role of its chairman Martin Moore-Bick, a retired high court judge and a specialist in contract law. British prime minister Theresa May agreed this month that two others should sit on a panel alongside Sir Martin, to offer expertise on the community living in the tower before the fire.

The prime minister initially rejected the idea of a panel but bowed to pressure from survivors and their supporters, who feared that Sir Martin’s background as a member of the establishment would not adequately equip him to understand the community and why they were not listened to by the authorities before the fire.

After the opening portraits of the victims, which is expected to last nine days, the inquiry will move to Holborn for its more formal evidence sessions. The first phase of the inquiry will focus on the sequence of the events on June 14th 2017, including fire safety and prevention measures, details of how the fire started and spread, and how residents were evacuated.

The second phase will look at events before the fire, including decisions about the refurbishment of the tower block with exterior cladding which has been widely blamed for the swift spread of the fire.

Housing minister James Brokenshire last week announced a consultation into a possible ban on combustible materials in cladding for buildings.

“The cladding believed to be on Grenfell Tower was unlawful under existing building regulations. It should not have been used. But I will ensure there is no room for doubt over what materials can be used safely in cladding of high-rise residential buildings. Having listened carefully to concerns, the government will consult on banning the use of combustible materials in cladding systems on high-rise residential buildings,” he said.

The prime minister said earlier this month that the Grenfell inquiry is on course to receive 400,000 documents and that 183,000 of 330,000 received so far have been reviewed by the inquiry team. The inquiry has 547 core participants, 519 of them from the Grenfell Tower community.