Male suspect named as 25-year-old Alek Minassian, no motive so far given 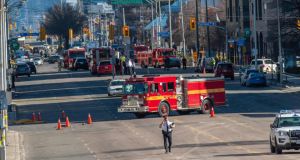 Toronto police and emergency crews on Yonge Street in northern Toronto, Canada, after nine people were killed and 16 injured when a man driving a white van plowed into pedestrians on a sidewalk. Photograph: Warren Toda/EPA

Canadian prime minister Justin Trudeau has led tributes to those killed on Monday after a van driver mounted a pavement in northern Toronto, leaving nine people dead and 16 injured.

The male suspect in the attack has been named as 25-year-old Alek Minassian.

No motive was given, but the Canadian Broadcasting Corporation on Monday night claimed he was not associated with any organised terror group.

Speaking in the Canadian parliament in Ottawa shortly after the attack occurred, Mr Trudeau said: “Our hearts go out to everyone affected,” as the country began to come to terms with an incident that unfolded during lunch hour in the busy city.

The tragedy happened as foreign ministers from the G7 countries gathered for a summit in the Intercontinental Hotel in Toronto. There was no confirmed link between the two events.

The van involved in multiple pedestrians stuck in the Yonge and Finch area of Toronto has been located and the driver arrested. ^sm

Noting that people across the world admire Canada for its tolerance, mayor of Toronto John Tory said the people of Toronto are “united in standing in solidarity, especially with those who have fallen victim to this terrible tragedy today”.

He said there would likely be days of disruption in the city due to the incident. “It is a time to be as calm as we can be,” he said, praising police and first responders to the tragedy.

Two hotlines were established by the city – one for families of victims, and a second for anyone with information to assist the police in their investigations. Businesses were ordered to send employees home early.

Deputy police chief Peter Yuen, who confirmed the fatalities at a press conference in Toronto, said police had begun receiving calls from a number of citizens shortly after 1.30pm local time reporting that a vehicle had mounted the pavement along Yonge Street in the city.

“We have located that vehicle, the driver’s in custody, and he is being investigated,” Mr Yuen said. “I want to offer my condolences to the families.”

Sunnybrook Health Sciences Centre confirmed it was treating seven patients from the scene in its trauma centre.

The driver is understood to have been detained by police about 2km north of where the incident began. A video purporting to show the interaction between the driver and the police shows a suspect daring a policeman to shoot him, and warning that he has a gun. He is then arrested by police.

The attack happened in a busy commercial area just north of the city. Schools went into lockdown after the event and there were huge delays in the area and in the downtown part of what is Canada’s largest city.