Princes William and Harry open up about their mother’s death, 20 years ago

Princes William and Harry speak candidly about their relationship with their mother Princess Diana for the first time in a new documentary to air on UTV on Monday July 24th at 9pm. 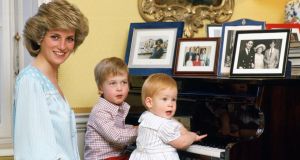 Diana, “the best mother ever”: Diana, Princess of Wales, with her sons, Prince William and Prince Harry, at the piano in Kensington Palace. Photograph: Getty

Prince William and Prince Harry have revealed deep remorse that their final conversation with their mother was a brief phone call that they cut short because they were too busy playing with their cousins.

In a television documentary about Diana, Princess of Wales, her sons speak candidly about their grief, their loss, and coping with the shock of her premature death, aged 36, 20 years ago.

They also remember “the best mother ever”, a mother, says Harry – who was just 12 when she died – “who brought a breath of fresh air to everything she did”.

William, who was 15 when Diana died, describes news of her death as if an “earthquake had run through the house”. His brother reveals he has cried only twice since, the first at her funeral on the lake island at Althorp, her ancestral home, where she is buried, “and probably only since then maybe once. So there’s a lot of grief that still needs to be let out.”

Diana died in a car crash in Paris on August 31st, 1997. The day she was killed, William says, the brothers were having a “very good time” at Balmoral, Queen Elizabeth’s private Scottish estate, with their cousins.

“Harry and I were in a desperate rush to say ‘goodbye’, ‘see you later’ and ‘we’re going to go off’ . . . If I’d known what would happen I wouldn’t have been so blase about it. But that phone calls sticks in my mind quite heavily,” he says.

Harry reveals he grew up thinking that “not having a mother was normal”. He says he was puzzled by the public grief, and remembers thinking, “How is it that so many people who have never met this woman, my mother, can be crying and showing more emotion than I was feeling?”

In lighter moments, the documentary, to be screened on Monday, captures their memories of what a fun mother she was.

William reveals that she once invited home three models as a surprise treat for him. “She organised when I came home from school to have Cindy Crawford, Christy Turlington and Naomi Campbell waiting at the top of the stairs. I was probably a 12- or 13-year-old boy who had posters of them on his wall. I went bright red and didn’t know quite what to say, and sort of fumbled and, I think, pretty much fell down the stairs on the way up. I was completely and utterly awestruck,” he says. “That was a very funny memory that’s lived with me forever.”

She also bought him the “rudest” cards, which he was embarrassed to open in front of his schoolmates.

Harry describes her as “a total kid through and through”, whose motto was “You can be as naughty as you want; just don’t get caught.”

Their mother lives with them every day. “She set us up really well. She gave us the right tools and has prepared us well for life in the best way she could, not, obviously, knowing what was going to happen,” says William.

He is keeping alive the memory of “Granny Diana” for his own children, George and Charlotte, as he regularly talks to them about her.

“It was just white noise”

Harry admits his difficulties in dealing with his grief. “People deal with grief in different ways, and my way of dealing with it was just by basically shutting it out, locking it out. The 10 years that I was in the army, I just dug my head in the sand and it was just . . . it was just white noise. And I went through a whole period of having to try and sort myself out.”

Speaking openly about her for the documentary had been daunting at first, but a “healing” process, William told journalists ahead of the broadcast. Her sons hope it will remind the public, especially the generation too young to remember her, of their mother’s warmth, humour and achievements. The programme chronicles Diana’s personal journey and her campaigns supporting the homeless and Aids victims, and to ban landmines.

William said: “We won’t be doing this again. We won’t speak as openly or publicly about her again, because we feel, hopefully, this film will provide the other side from close family friends you might not have heard before, from those who knew her best and from those who want to protect her memory, and want to remind people of the person that she was.”

He added: “Twenty years on, Harry and I felt that it was an appropriate time to open up a bit more about our mother.”

Diana, Our Mother: Her Life and Legacy is on UTV on Monday, July 24th at 9pm