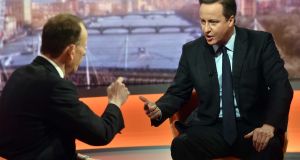 David Cameron has moved to sever any link between the EU referendum and his own political future by stating he will remain as prime minister even if he loses the vote on British membership.

As Cameron confirmed he hoped to hold the in/out referendum in the summer, he said that his authority rested on holding the vote, not the result of it.

In his annual new year interview with The Andrew Marr Show on BBC1, Cameron gave his clearest signal to date that he is determined to maintain Britain’s membership of the EU.

Asked whether he was prepared for the possibility of a UK exit, the prime minister said: “I don’t think that is the right answer for the reasons I have given.” But he said he would have to make an exit work if voters rejected EU membership.

Making clear where his heart lies, Cameron added: “I’m clear in politics what my goal is: my goal is renegotiation, referendum, secure Britain’s place in a reformed European Union.”

Eurosceptics said the prime minister had shown he is working on the assumption that he will campaign for a yes vote in the referendum – after hailing his negotiations as a success – when he indicated that no contingency plans are being made for an exit.

“This is actually disgraceful,” the former shadow home secretary David Davis told the Sunday Politics on BBC1 of the suggestion by the prime minister that no such plans are being made. “You’ve got two moderately likely outcomes, we don’t know which it will be.”

It is understood that at least one minister has suggested to Downing Street that it would be a wise precaution to make contingency plans for an out vote. This has been rebuffed by No 10.

The prime minister expressed confidence that he was making progress in his negotiations with Britain’s EU partners to address what he described as the EU issues that “drive us up the wall”.

“It is hard work,” he said. “But the areas that I have identified are the things that drive us up the wall about Europe that we need to deal with. Let’s make sure we are not part of an ever-closer union. I think we are on the way to getting that fixed.

“The idea that Europe must add to our competitiveness, not take away from our competitiveness, making sure this isn’t just a single currency club but it is flexible enough for countries like Britain with our own currency. And then dealing with this issue of the abuse of free movement and the pressure of migration from the EU on Britain by amending welfare rules.”

Cameron added that he was confident of a deal at the next EU summit in February. This would allow a referendum to be held by June. But it is widely expected the legal complexities of the negotiations mean that a deal may have to wait until the following EU summit in March, which would delay a referendum until September. The prime minister said in his interview that he is prepared to wait longer to secure the right deal.

The prime minister was keen to repeat the tactic he deployed before the Scottish independence referendum to kill of any attempt to link his future to the result. Asked if he would remain as prime minister if he lost the EU vote, he said: “The answer to that is yes. My policy is to hold a renegotiation and then a referendum. That is what we promised in the manifesto and then to abide by what the British public say. Now I hope that answer will be staying in a reformed Europe.

In the final weeks of the Scottish referendum, when polls suggested that the people of Scotland might vote for independence, the prime minister did privately draw up a resignation letter. It was widely felt in Downing Street that his position would have been untenable had he lost the referendum. But he did not want to give any public hint of his thinking. – Guardian service