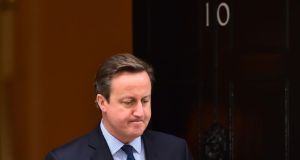 British prime minister David Cameron, who is expected to outline his plan for airstrikes on Isis in Syria. Photograph: Dominic Lipinski/PA Wire

David Cameron will set out the case for British airstrikes on Islamic State (IS) targets in Syria within days, in the hope of winning parliamentary approval in early December. Chancellor of the Exchequer George Osborne said the prime minister would address a number of questions raised by MPs surrounding the diplomatic and military implications of attacking IS in Syria.

“We will call the vote when we are confident we have the numbers to win it,” Mr Osborne told the BBC.

The Royal Air Force already carries out airstrikes in Iraq, as part of a United States-led coalition against IS, but the House of Commons has yet to approve extending the mission to Syria. Earlier this month, the House of Commons Foreign Affairs Committee said the government should not seek approval for action in Syria until it could answer specific questions about its international strategy and the military imperative for extending the campaign.

The terrorist attacks in Paris and a unanimous vote in the United Nations Security Council on Friday, calling on all countries to “combat by all means this unprecedented threat”, has boosted support for attacking IS in Syria. Crispin Blunt, the Conservative chairman of the Foreign Affairs Committee, told The Observer that he had changed his mind on the issue.

“A month ago we did not believe the conditions we set could be met. I now do. It remains for the prime minister to demonstrate that our government is properly focused on how,” he said.

With up to 30 Conservative MPs opposed to bombing in Syria, the government, which has a majority of 12 seats, will need the support of some opposition MPs. It received a boost on Saturday when the DUP’s Nigel Dodds suggested that his party’s eight MPs were likely to support the government.

“We have always said we can back British military force, provided it is realistic and in the national interest. The scene is set for our action being just that. It falls to David Cameron to show us that it will be. Not least, he will need to show that we will get right the things we got wrong in Libya,” he said.

Labour leader Jeremy Corbyn on Saturday repeated his opposition to British military action in Syria, arguing that the attacks in Paris strengthened the case for a diplomatic solution in Syria. Mr Corbyn is under increasing pressure to allow Labour MPs a free vote on this.

Shadow foreign secretary Hilary Benn, who is open to supporting military action in some circumstances, welcomed the UN resolution, although it does not authorise military action under Chapter VII of the UN Charter. “I welcome the United Nations Security Council’s unanimous approval of this resolution that urges UN member states to take all necessary measures to combat Isil/Daesh in Iraq and Syria because of the unprecedented threat it represents to international peace and security,” he said.

Mr Osborne said the prime minister would address the issues identified by the Foreign Affairs Committee and give MPs time to digest his response before calling a vote.