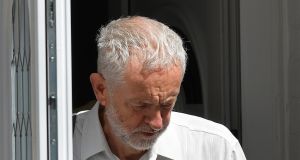 Britain’s opposition Labour party leader Jeremy Corbyn said “a wreath was indeed laid” for “some of those who were killed in Paris in 1992”. File photograph: Toby Melville/Reuters

Jeremy Corbyn has said he was present but not involved at a wreath-laying ceremony for members of the group that carried out the Munich Olympics massacre, who were killed in Paris in 1992.

The Labour leader, on a campaign trip to Walsall in the West Midlands, was responding to a question from journalists after a front-page report in the Daily Mail that he was at the controversial event in Tunisia in 2014.

Mr Corbyn said “a wreath was indeed laid” for “some of those who were killed in Paris in 1992” and added, in response to a question: “I was present at that wreath-laying, I don’t think I was actually involved in it.”

He added: “I was there because I wanted to see a fitting memorial to everyone who has died in every terrorist incident everywhere.

On Saturday, the Daily Mail published pictures of Mr Corbyn holding a wreath at the Palestinian martyrs’ cemetery in Tunisia, during a visit to that country in 2014, a year before he became the party’s leader.

Israeli president Binyamin Netanyahu said on Twitter on Monday: “The laying of a wreath by Jeremy Corbyn on the graves of the terrorist who perpetrated the Munich massacre and his comparison of Israel to the Nazis deserves unequivocal condemnation from everyone – left, right and everything in between.”

The laying of a wreath by Jeremy Corbyn on the graves of the terrorist who perpetrated the Munich massacre and his comparison of Israel to the Nazis deserves unequivocal condemnation from everyone – left, right and everything in between

Labour said Mr Corbyn had already made clear he was paying his respects to the victims of a 1985 Israeli air strike on Palestinian Liberation Organisation offices in Tunis.

There are memorials to the victims of the 1985 bombing and a plaque that commemorates one of the individuals behind the Black September group in different parts of the cemetery.

Black September was the Palestinian terrorist group that carried out the massacre of 11 Israelis at the 1972 Munich Olympics. Many of the perpetrators are alleged to have been killed subsequently by Israeli agents working for its Mossad secret service.

Mr Corbyn wrote about the trip shortly afterwards in the Morning Star in October 2014. He said: “Wreaths were laid to mark the 1985 bombing of the PLO HQ and on the graves of others killed by Mossad agents in Paris in 1991.”

Labour MP Luciana Berger said Mr Corbyn needed to go further and apologise. “Being ‘present’ is the same as being involved. When I attend a memorial, my presence alone, whether I lay a wreath or not, demonstrates my association and support. There can also never be a ‘fitting memorial’ for terrorists. Where is the apology?” she said.

The controversy emerges at a time when Labour is embroiled in a row about anti-Semitism and whether the party will adopt in full, with all its examples, the definition produced by the International Holocaust Remembrance Alliance (IHRA).

Mr Corbyn said in the same interview that the Labour party would consult the Jewish and Palestinian communities over whether to adopt one remaining example attached to the IHRA definition.

Striking a conciliatory tone, he said Labour had agreed to the IHRA definition and almost all of its 11 examples.

“The one example that we are discussing and consulting on is one that makes sure that you can discuss and debate the relations between Israel and Palestine, the future of the peace process, and yes make criticisms of the actions of the Israeli government in the bombing of Gaza and other places,” Mr Corbyn said.

He added: “But you can never make those criticisms with anti-Semitic language or anti-Semitic intentions. And that is what we are absolutely clear on.”

His remarks confirmed that Labour had dropped its objections to three other examples attached to the IHRA code. The remaining sticking point is the example that states “claiming that the existence of a state of Israel is a racist endeavour” is anti-Semitic – because of concerns in the party about hindering legitimate criticism of the creation of Israel. – Guardian

1 Bobby Storey: The IRA's planner and enforcer who stayed in the shadows
2 Coronavirus claims one more life while 11 new cases reported in Republic
3 Covid-19: Travel restrictions to stay and 'green list' put on hold amid fears of second wave
4 Rare whale dies after getting into distress in Wicklow Harbour
5 Gardaí seek help in finding missing Roscommon toddler
Real news has value SUBSCRIBE