Corbyn apologises over event in which Israel was compared to Nazis 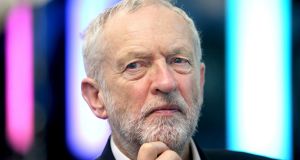 British Labour leader Jeremy Corbyn, who has apologised over an event he hosted in 2010 during which Israel was compared to the Nazis. Photograph: Jane Barlow/PA Wire

The British Labour Party has been urged again to take a tougher stance on anti-Semitism after its leader, Jeremy Corbyn, apologised for sharing a platform with people who reportedly compared Israel to the Nazis.

Mr Corbyn issued the apology after it emerged he had hosted a Holocaust Memorial Day event in 2010 at which speakers are said to have likened the actions of Israel in Gaza to Hitler’s regime.

The Labour leader acknowledged that he had appeared alongside people “whose views I completely reject” and apologised for the “concerns and anxiety” that caused.

He said: “The main speaker at this Holocaust Memorial Day meeting, part of a tour entitled ‘never again – for anyone’, was a Jewish Auschwitz survivor. Views were expressed at the meeting which I do not accept or condone.

“In the past, in pursuit of justice for the Palestinian people and peace in Israel/Palestine, I have on occasion appeared on platforms with people whose views I completely reject. I apologise for the concerns and anxiety that this has caused.”

Labour MP John Mann said Mr Corbyn went against “normal decency” in hosting the 2010 meeting. Mr Mann, a longstanding critic of Mr Corbyn, said it was “extraordinary” that the Labour leader had held a “protest event” on Holocaust Memorial Day.

And a supporter of Mr Corbyn on Labour’s ruling body called on the party leader to fully adopt the International Holocaust Remembrance Alliance (IHRA) definition of anti-Semitism, including its examples.

Referring to the the IHRA definition, Ann Black, a member of Labour’s national executive committee (NEC), told BBC Radio 4’s Today programme: “If it’s necessary to add to it to make clear that it does not stop party members defending the rights of the Palestinians, or criticising certain sections of the Israeli government, then that is fine.

“But that is the starting point and I believe Jeremy Corbyn has the ability and the authority to do it, and I hope he does so.”

The Campaign Against Antisemitism (CAA) has referred Labour to the Equality and Human Rights Commission and made a complaint to the party about comments by Mr Corbyn and his hosting of the 2010 event.

CAA chairman Gideon Falter was scathing about Mr Corbyn’s apology. “Jeremy Corbyn has spent his political career sharing stages with anti-Semites and honouring them,” he said. “This apology rings utterly hollow. Mr Corbyn did not merely attend the event, he chaired it, and in response to the criticism of the Jewish community in 2010 he did not apologise.

“Only now, eight years late and under enormous pressure, has Mr Corbyn issued his mealy-mouthed apology. We do not believe him.”

The CAA’s letter to the equality watchdog regarding Labour said: “We charge that the party has, through years of deliberate or reckless dereliction of its duty to enforce its own rules, created an atmosphere in which Jewish members and/or associates are discriminated against.”

The organisation also issued a fresh complaint – its third – about Mr Corbyn to Labour.

As well as the 2010 Holocaust Memorial Day event it seized on comments made by Mr Corbyn in 2012 when appearing on Press TV, the Iranian state-owned broadcaster, in which he linked a massacre of 16 Egyptian policeman to Israel.

A Labour Party spokesman said: “Labour is committed to rooting out anti-Semitism from our party and society. False and partisan attacks like this undermine the fight against anti-Semitism.”

One aspect of the CAA’s complaint was the party’s refusal to fully adopt the IHRA definition of anti-Semitism, including its examples.

The party spokesman said: “Labour has adopted the IHRA definition, which is reproduced word for word in our code of conduct, and the examples are expanded on and contextualised to produce legally robust guidelines that a political party can apply to disciplinary cases.

“IHRA says its text is not legally binding and therefore there is no basis to legally challenge the code of conduct.”

An Equality and Human Rights Commission spokesman said: “We have received the complaint and will consider it to see what, if any, action is needed.”

The latest controversy came as a member of Labour Party’s ruling body apologised for offensive comments about Jews. Peter Willsman called some members of the Jewish community “Trump fanatics” and suggested they were “making up” problems about anti-Semitism in the party.

He subsequently apologised, acknowledging the “offensive nature of my comments”, and has referred himself for equalities training.

Mr Willsman, who is standing for re-election to the NEC, said: “I recognise the offensive nature of my comments and that, in diminishing the experiences of those who face anti-Semitism in our party and society, I showed a lack of the sensitivity required for discussions around racism.” – PA