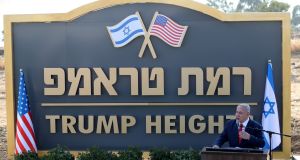 Inaugurating the new settlement of Ramat Trump (Trump Heights) on the Israeli-occupied Golan Heights on Sunday, Israeli prime minister Binyamin Netanyahu said it was a historic day that marked an opportunity to honour a great friend of Israel.

“President Donald Trump, who recently recognised Israeli sovereignty over the Golan Heights, is the first international leader to have done so. He tore the mask off this hypocrisy, which does not recognise what is self-evident,” Mr Netanyahu said.

Earlier, the Israeli cabinet held a festive session at the site of the new community, which is currently home to a handful of families.

Speaking at the inauguration ceremony, US ambassador to Israel David Friedman said it was extremely rare that an entire community anywhere in the world would be dedicated in the name of a sitting president, noting that the last time it happened in Israel was with the establishment of Kfar Truman in 1949, during the administration of president Harry S Truman.

“President Trump will be honoured to be in that small cadre of Israeli heroes,” he said, calling the Golan Heights an “incredibly important territory for Israel”.

Mr Trump signed a proclamation recognising Israeli rule on the Golan on March 25th during a visit by Mr Netanyahu to the White House, just weeks before the Israeli election.

The move reversed decades of US policy and drew international condemnation, led by the Syrian government.

Israel captured the Golan Heights from Syria in the 1967 Six-Day War and, in 1981, effectively annexed the area.

Twenty-four families and couples in their 40s are ready to move to Ramat Trump. The settlement group was set up 11 months ago by Golan residents who wanted to live in a new settlement on the strategic plateau which overlooks much of the northern Galilee.

“We set up this group in the belief that after 20 years during which no new community has been established on the Golan, the time has come for a new community that will bring something new to the area,” said Sagee Hadashi, the founder of the settlement group.

Critics condemned Sunday’s ceremony as a publicity stunt, noting that Mr Netanyahu’s interim government has no authority to establish a new community until after the September elections.

“Anyone who reads the fine print in this ‘historic’ decision will understand that this is nothing more than a nonbinding, fake policy,” Blue and White Knesset member Zvi Hauser said. Mr Hauser noted that after 52 years of Israeli rule, there are still only 25,000 Israelis in the Golan.

“We’ve had hundreds of requests, including from Jews living in America and Canada, saying they want to immigrate to Israel and live in Ramat Trump,” said Haim Rokah, head of the Golan regional council.