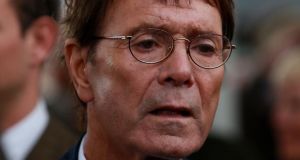 South Yorkshire Police today said it was searching a property in Sunningdale, Berkshire, in connection with an alleged sexual offence involving a boy under the age of 16 in the 1980s. The BBC reported the property is owned by Sir Cliff Richard. File photograph: David Davies/PA Wire

Pop veteran Sir Cliff Richard has dismissed a claim that he sexually assaulted a young boy in the 1980s as “completely false”.

The star hit out as police searched his Berkshire apartment today, saying he had seen allegations circulating online for months but had chosen not to “dignify” them with a response.

Sir Cliff, 73, is not currently in the UK but pledged to co-operate with the inquiry, which concerns the alleged sexual assault of a boy in the 1980s.

It is understood that lawyers for the singer, who is believed to be in Portugal, have been in contact with South Yorkshire Police, who are carrying out the inquiry.

The investigation is not connected to Scotland Yard’s high profile sex crime probe Operation Yewtree, which was launched in the wake of the Jimmy Savile abuse scandal.

In a statement, Sir Cliff said: “The allegations are completely false. Up until now I have chosen not to dignify the false allegations with a response, as it would just give them more oxygen.”

“However, the police attended my apartment in Berkshire today without notice, except it would appear to the press,” he said.

“I am not presently in the UK but it goes without saying that I will cooperate fully should the police wish to speak to me.”

“Beyond stating that today’s allegation is completely false it would not be appropriate to say anything further until the police investigation has concluded.”

Speaking at a police station in South Yorkshire, Detective Superintendent Matt Fenwick stressed the investigation is in its “really early stages”.

He said: “South Yorkshire Police have gained entry into a property in the Sunningdale area of Berkshire. Officers are currently searching that property.”

“A search warrant has been granted after police received an allegation of a sexual nature dating back to the 1980s. This involved a young boy under the age of 16 years.”

“No one has been arrested at this stage and the owner of the property is not present.”

Born as Harry Webb in Lucknow, India in 1940, Sir Cliff has become one of the most enduring stars of his time, with hits including Devil Woman and Living Doll.

He was knighted in 1995, the first rock star to be so honoured and performed at the Queen’s Diamond Jubilee concert at Buckingham Palace in 2012.