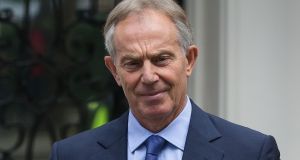 Sir John Chilcot has delivered a devastating critique of Tony Blair’s decision to go to war in Iraq in 2003, with his long-awaited report concluding that Britain chose to join the US invasion before “peaceful options for disarmament” had been exhausted.

The head of the Iraq war inquiry said the UK’s decision to attack and occupy a sovereign state for the first time since the second World War was a decision of “utmost gravity”. He described Iraq’s president, Saddam Hussein, as “undoubtedly a brutal dictator” who had repressed his own people and attacked his neighbours.

But Chilcot - whom Gordon Brown asked seven years ago to head an inquiry into the conflict - was withering about Blair’s choice to join the US invasion. Chilcot said: “We have concluded that the UK chose to join the invasion of Iraq before the peaceful options for disarmament had been exhausted. Military action at that time was not a last resort.”

The report suggests that Blair’s self-belief was a major factor in the decision to go to war. In a section headed Lessons, Chilcot writes: “When the potential for military action arises, the government should not commit to a firm political objective before it is clear it can be achieved. Regular reassessment is essential.”

The report also bitterly criticises the way in which Blair made the case for Britain to go to war. It says the notorious dossier presented in September 2002 by Blair to the House of Commons did not support his claim that Iraq had a growing programme of chemical and biological weapons.

The then Labour government also failed to anticipate the war’s disastrous consequences, the report says. They included the deaths of “at least 150,000 Iraqis - and probably many more - most of them civilians” and “more than a million people displaced”. “The people of Iraq have suffered greatly,” Chilcot says.

Chilcot does not pass judgment on whether the war was legal. But it says the way the legal basis was dealt with before the 20 March invasion was far from satisfactory. The attorney general, Lord Goldsmith, should have given written advice.

Goldsmith told Blair that war without a second UN resolution would be illegal, only to change his mind after a trip to Washington in March 2003 and meetings with Bush administration legal officials.

Chilcot’s report is more damning than expected and amounts to arguably the most scathing official verdict given on any modern British prime minister. His 2.6m-word, 12-volume report was released on Wednesday morning, together with a 145-page executive summary.

o There was no imminent threat from Saddam Hussein.

o The strategy of containment could have been adopted and continued for some time.

o The judgments about the severity of the threat posed by Iraq’s weapons of mass destruction (WMDs) were presented with a certainty that was not justified.

o Despite explicit warnings, the consequences of the invasion were underestimated. The planning and preparations for Iraq after Saddam were wholly inadequate.

o The government failed to achieve its stated objectives.

It report also sheds fresh light on the private discussions between Blair and the US president, George W Bush, in the run-up to war. The report says that after the 9/11 attacks Blair urged Bush “not to take hasty action on Iraq”. The UK’s formal policy was to contain Saddam’s regime.

But by the time the two leaders met in April 2002 at Bush’s ranch in Crawford, Texas, the UK’s thinking had undergone “a profound change”. The joint intelligence committee had concluded that Saddam could not be removed “without an invasion”, with the government saying Iraq was a threat “that had to be dealt with”.

‘I will be with you whatever’

Blair sent Bush a series of private notes setting out his thinking. One written on 28 July 2002, and released for the first time on Wednesday, in the face of opposition from the Cabinet Office, said: “I will be with you [Bush]whatever.”

It added: “This is the moment to assess bluntly the difficulties. The planning on this and the strategy are the toughest yet. This is not Kosovo. This is not Afghanistan. It is not even the Gulf war.”

At times, Blair’s notes read more like stream of consciousness than considered policy documents. The note continued: “He [Saddam]is a potential threat. He could be contained. But containment … is always risky.”

According to Chilcot, Blair shaped his diplomatic strategy around the need to get rid of Saddam which - he told Bush - was the “right thing to do”. Blair suggested that the simplest way to come up with a casus belli was to give an ultimatum to Iraq to disarm, preferably backed by UN authority.

Chilcot rejects Blair’s view that spurning the US-led military alliance against Iraq would have done major damage to London’s relations with Washington. “It’s questionable it would have broken the partnership,” he writes, noting that the two sides had taken different views on other major issues including the Suez crisis, the Vietnam war and the Falklands.

The report says that by January 2003 Blair had concluded “the likelihood was war”. He accepted a US military timetable for action by mid-March, while at the same time publicly blaming France for failing to support a second UN resolution in the security council authorising military action.

Chilcot is again unimpressed. “In the absence of a majority in support of military action, we consider that the UK was, in fact, undermining the security council’s authority,” he says.

The report also demolishes Blair’s claim made when he gave evidence to the inquiry in 2010 that the difficulties encountered by British forces in post-invasion Iraq could not have been known in advance.

“We do not agree that hindsight is required,” Chilcot says. “The risks of internal strife in Iraq, active Iranian pursuit of its interests, regional instability, and al-Qaida activity in Iraq, were each explicitly identified before the invasion.”

Blair released a statement immediately after the publication of the report, saying that Chilcot found he had not made any “secret commitment to war” with George Bush, that there was no falsification or improper use of intelligence, nor any deception of the cabinet.

He added: “The report should lay to rest allegations of bad faith, lies or deceit. Whether people agree or disagree with my decision to take military action against Saddam Hussein, I took it in good faith and in what I believed to be the best interests of the country.”

Blair said he would hold a press conference later in the day, saying he needed to answer Chilcot’s “serious criticisms”.

Critical of ministry of defence

The report is critical of the ministry of defence and military commanders who were tasked with occupying four southern provinces of Iraq once Saddam had been toppled. “The scale of the UK effort in post-conflict Iraq never matched the scale of the challenge,” Chilcot says, noting that security in Baghdad and south-east Iraq deteriorated soon after the invasion.

In the end, 179 British service personnel died before UK forces pulled out in 2009. Chilcot said the MoD was “slow in responding to the threat from improvised explosive devices”. He said that delays in providing properly armoured patrol vehicles “should not have been tolerated”. Nor was it clear which official was in charge. “It should have been,” Chilcot said.

As part of his remit, Chilcot also sets out what lessons can be learned. He says that Blair “overestimated his ability to influence US decisions on Iraq”.

He adds: “The UK’s relationship with the US has proved strong enough over time to bear the weight of honest disagreement. It does not require unconditional support where our interest or judgments differ.”