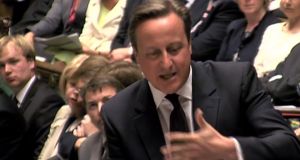 David Cameron: ‘Assad has butchered his own people and . . . Isil [Isis] have in their own way butchered others, and millions have fled Syria.’ Photograph: PA/PA Wire

David Cameron has said “hard military force” will be needed to remove president Bashar al-Assad from power in Syria and to defeat Islamic State.

As he signalled the start of a government campaign to make the case for greater British military involvement in Syria, the prime minister suggested that a failure to take action would be as big a decision as one to launch action.

Cameron made his remarks at prime minister’s questions as Harriet Harman, Labour’s interim leader, pressed him to put a figure on the number of refugees Britain was prepared to take from refugee camps in countries neighbouring Syria.

The prime minister said: “She talks about going to the causes of these crises. She is absolutely right about that. We have to be frank, particularly the eastern Mediterranean crisis is because Assad has butchered his own people and because Isil [Isis] have in their own way butchered others, and millions have fled Syria.

The prime minister’s remarks suggest the government is preparing the ground to make the case for military action, which could take place on two fronts. These are expanding British involvement in airstrikes against Isis targets from Iraq to Syria, and possibly taking action against Assad. The prime minister’s decision to highlight the need for “hard military force” to remove Assad may cause some surprise as he lost a parliamentary vote in August 2013 that was designed to lead to military strikes against the Assad regime.

The prime minister has signalled that he would not seek parliamentary approval for an extension of British involvement in airstrikes from Iraq to Syria unless he could be guaranteed a cross-party consensus. – Guardian