Referendum unavoidable if Tories govern after May, says ex-chancellor 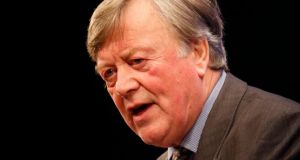 “I think this referendum is a great threat to the political stability of the country,” says Kenneth Clarke

Kenneth Clarke was born in July 1940 just weeks after Winston Churchill became British prime minister. Now 74, he sits in his office in Westminster, having just arrived from his Nottingham constituency, and flicks quickly through his post.

Clarke is running again in the May elections. Pointing to the table, he says: “You see: I’m preparing election material. I am too old to go off and do anything else. No desire to do it, frankly; I’m an addict.”

Europe has frequently dominated his time in the House of Commons, and it will do so again if the voters in the Rushcliffe constituency, which includes West Bridgford, the town of his birth, make the same choice they have made in every selection since 1970.

“Membership of the EU is absolutely essential for both the UK and Ireland for our place in the world,” says the former chancellor of the exchequer, who will speak in Dublin on Friday at a European Movement conference.

A Conservative majority government would mean a referendum was certain, he says. Even if the Tories and Liberal Democrats agree a new coalition it would also take place because “David and the majority of my colleagues would insist on that”.

“The Liberal Democrats don’t want a referendum but I have no great faith in their resistance holding if they could get back in office. There is one caveat. Nick [Clegg] will have great difficulty persuading his backbenchers to go into coalition with the Conservatives again.”

Labour leader Ed Miliband and Clegg “have fortified each other” by “sticking to the formula that all three parties were agreed on in 2010 – that a referendum would be held only if there was a transfer of more powers to Brussels”.

However, Clarke sees little hope that a Labour-Liberal Democrats coalition would be able to fend off demands for a referendum: “On paper they could get away with not having a referendum,” he says.

Miliband, he accepts, does not want a referendum. “It is obvious common sense: once you launch into a referendum, whatever government you have got will find its existence is dominated by a wild debate about Europe.”

However, Miliband will face a torrent of pressure if he ends up in No 10.

“I do not have confidence in the backbone of the leadership of the other parties to resist if it is the price of sharing power. They would be reviled by the right-wing popular press if they stuck to that. I do my best to stiffen them up. I think this referendum is a great threat to the political stability of the country at a time when we are still in a financial crisis.”

Cameron has always persuaded him he wants the UK to stay in the EU and Clarke has “always believed that”.

“You are asking the really big question. I have no doubt that David wants to stay in the EU. I think he will try. We’ll see how far this is a matter of principle for him,” he says.

Cameron can win concessions. The British agenda – completion of the single market, new trade deals, abolition of red tape, welfare benefit abuse curbs – now has wide support across the EU. “Those propositions are not resisted by anyone,” says Clarke.

The “appalling” implications of an EU exit for Anglo-Irish relations, or indeed for the future of the UK, have not been considered sufficiently by some of those guilty of loose talk in London, he says.

“It is only just dawning on people that if we have a referendum and the English vote to leave and the Scots vote to stay, then I think that that will be the end of UK. I don’t want to see the end of the UK.

“And I certainly don’t want to see any border – apart from the present legal Border – springing up between the UK and Ireland. For 21st-century citizens that would be preposterous. The British are going to have to have regard for the Irish element in what they are negotiating.”

1 Bobby Storey: The IRA's planner and enforcer who stayed in the shadows
2 Transgender Cork farmer (65) surprised at positive response to telling her story
3 Q&A: How close are we to having a Covid-19 vaccine?
4 Is Donald Trump losing his touch?
5 Fianna Fáil’s return to power marred by appointments carve-up
Real news has value SUBSCRIBE