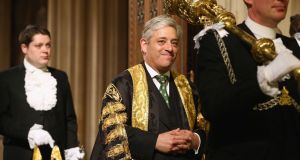 Commons speaker John Bercow: fresh controversy after a recording emerged in which he told students that he had voted against leaving the European Union in last year’s referendum. Photograph: Dan Kitwood/PA Wire

Theresa May’s government has rejected a petition, which attracted 1.8 million signatures, calling for Donald Trump’s state visit to Britain to be cancelled. In a response to the petitioners, the foreign office said it recognised the “strong views” expressed by many who opposed the US president’s visit but made clear it would go ahead as planned.

“HM Government believes the president of the United States should be extended the full courtesy of a state visit. We look forward to welcoming President Trump once dates and arrangements are finalised,” the foreign office statement said.

“This invitation reflects the importance of the relationship between the United States of America and the United Kingdom. At this stage, final dates have not yet been agreed for the state visit.”

Any petition with more than 100,000 signatures can be considered for a debate in parliament and MPs will debate Mr Trump’s visit when they return from recess next week. The speaker of the House of Commons John Bercow faced calls from Conservatives to stand down after he told MPs last week that the US president would not be welcome to address a joint session of both houses of parliament.

Mr Bercow’s statement won applause from opposition MPs but Conservative James Duddridge has tabled a motion of no confidence in the speaker.

“He has overstepped the mark a number of times but this most recent incident – where he used the speaker’s chair to pronounce his views on an international situation in some quite detailed and lengthy manner – is wholly inappropriate and it means that he can no longer reasonably chair, as speaker, any debate on those subjects,” Mr Duddridge said last week.

Only a handful of MPs have publicly backed the call for Mr Bercow to step down but the speaker’s position became more vulnerable over the weekend when a recording emerged in which he told students that he had voted against leaving the European Union in last year’s referendum. The speaker is supposed to be politically neutral and Mr Bercow, a Conservative, owes his position to the support of many opposition MPs.

The government has remained silent on the speaker’s future, insisting that it is a matter for parliament, although his enemies claim that up to half the cabinet want hm to go.

“Maintaining communication between the USA and UK is sensible, but rolling out the red carpet to a man who stands for everything that Britain doesn’t is disgusting. Millions of Brits have called for this visit not to happen, and millions more want nothing to do with a man intent on promoting sexism and racism in everything he does. This is a poor decision by a desperate prime minister,” Mr Farron said.