Brexit: Quotes from and viewpoints on Britain’s great debate

What Leave and Remain supporters said during the divisive campaign 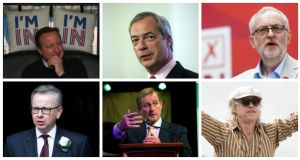 “Are we going to choose Nigel Farage’s vision – one which takes Britain backwards, divides rather than unites, and questions the motives of anyone who takes a different view? Or will we, instead, choose the tolerant, liberal Britain: a country that doesn’t blame its problems on other groups of people, one that doesn’t pine for the past, but looks to the future with hope, optimism and confidence? I think the answer will determine what our country feels like for a very long time.”
British prime minister David Cameron – June 19th

“I’m not going to take blame for people’s decision. Obviously I’m hoping there’s going to be a Remain vote but there may not. Whatever the result that is the result of the referendum and we’ve got to work with it.”
Labour leader Jeremy Corbyn – June 20th

“I believe that the decisions which govern all our lives, the laws we must all obey and the taxes we must all pay should be decided by people we choose and who we can throw out if we want change. If power is to be used wisely, if we are to avoid corruption and complacency in high office, then the public must have the right to change laws and governments at election time. But our membership of the European Union prevents us being able to change huge swathes of law and stops us being able to choose who makes critical decisions which affect all our lives.”
Pro-Brexit justice secretary Michael Gove – February 20th

“We share the UK’s only land border with another EU member state. Those many thousands of UK visitors to Ireland in recent years know that the border between both parts of Ireland is barely visible. There is a seamless flow of people crossing that border. If the UK’s decision is to leave the EU, this will no longer be a border between two countries. It will be a border between the UK and the remaining 27 member states of the EU. It will be the EU’s western boundary running from Derry to Dundalk.”
Taoiseach Enda Kenny – June 20th

“If Britain removes itself from the EU, the only land border between the UK and Europe will be the land border between Northern Ireland and Ireland. The hardening of the border will send all the wrong signals.”
Former Irish president Mary McAleese – June 9th

“You are a fraud, Nigel. Go back down the river because you are up one without a canoe or a paddle. Stop lying. This election is too important.” Bob Geldof to Nigel Farage during a bizarre confrontation on the
Thames between the Leave and Remain campaigns – June 17th

“My view of the implications for the food industry in Britain and for food manufacturers like us of Britain leaving Europe would be bad. And not marginally bad – very bad.”
Greencore chief executive Patrick Coveney – March 1st

“I don’t see why it [freedom to travel] couldn’t happen within the island of Ireland. We might then need to ensure that there wasn’t people coming in through that route into Great Britain. There is so much trade, so much cross-border working, so many families that live both sides of the Border that I don’t think it would be in anyone’s mind, on either side that we would want to interrupt the flow of life that frankly existed during the appalling difficulties of the Troubles and I don’t why we would want to do anything to disrupt that.”
Pro-Brexit MP Conor Burns who is originally from Belfast, April 20th