Brexit Party MEPs abandon Farage to back Tories in election 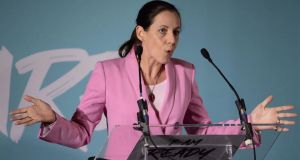 Annunziata Rees-Mogg: “The Conservatives are the only option for Brexit supporters and democrats alike.” Photograph: Joe Giddens/PA

Three Brexit Party MEPs have quit the party to back Boris Johnson’s Brexit deal and the Conservatives instead.

Annunziata Rees-Mogg – sister of Commons leader Jacob Rees-Mogg – Lance Forman and Lucy Harris have all resigned the whip to back the prime minister’s push to “get Brexit done”.

It follows the decision on to sack John Longworth, the former director general of the British Chambers of Commerce, for “repeatedly undermining” leader Nigel Farage’s election strategy.

Ms Rees-Mogg, MEP for the East Midlands and a former Conservative candidate, said: “We need a strong Leave-supporting government to deliver the Brexit 17.4 million voted for.

“The Conservatives are the only option for Brexit supporters and democrats alike.”

Mr Farage, who is not standing at this election, said he was “disappointed” by the decision.

Mr Longworth, who left his role at the chamber in 2016 after coming out in favour of leaving the European Union three months before the EU referendum, had been critical of Mr Farage’s decision to stand Brexit Party candidates in Labour marginals.

While Mr Farage opted last month not to contest the 317 seats won by the Tories at the 2017 election, he pushed ahead with attempts to win Labour heartlands in the North and Midlands of England where there was a strong Leave turnout at the Brexit referendum.

Mr Longworth has been outspoken in the media, arguing the party should be targeting between just 20 and 30 seats.

Speaking before a press conference in Westminster on Thursday, Mr Longworth said: “For those who want Brexit, Boris Johnson’s deal is the only option available. Labour does not have a plan.”

Miss Harris, representing Yorkshire and the Humber, and Lance Forman, MEP for London, will also speak to the media.

In reply, Mr Farage said the Brexit Party had already worked to assist the Tories in securing a majority for exiting the EU.

“Whilst we are disappointed that four of our MEPs don’t seem to understand that we both saved the Conservative party from large-scale losses to the Liberal Democrats in the south and southwest of England, but we are also hammering the Labour Leave vote in its traditional heartlands, making it much easier for the Conservatives to win many of those seats,” said Mr Farage.

“The only vote on the Leave side that is currently being split is in areas such as Barnsley, the South Wales Valleys, Doncaster and Hartlepool, where there is a risk that the Tories will split our vote.”

A party spokesman added: “We also note that one of the MEPs is the sister of a cabinet minister, another has a partner who works in the office of the same cabinet minister, and yet another is a personal friend of both Boris Johnson and Michael Gove.

“In the case of John Longworth, who was for years the firmest advocate of WTO withdrawal that we have ever met, he underwent a metamorphosis into being a supporter of the new EU treaty following two days of meetings in London.

“We hope that Mr Longworth is well rewarded for his actions.” – PA