Covid-19: Wales to begin two-week lockdown amid concern for over-60s in Britain 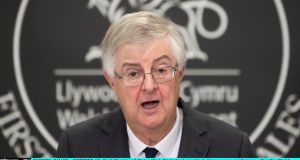 First minister of Wales Mark Drakeford after the cabinet announced in Cardiff that Wales would go into national lockdown from Friday until November 9th. Photograph: Matthew Horwood/Getty Images

Wales will enter a two-week lockdown on Friday, with people told to stay at home and schools closing along with bars, restaurants and non-food shops. First minister Mark Drakeford said the measure, which he described as a “fire-break”, was necessary because the virus was spreading throughout Wales.

“We all want to see an end to this pandemic and our lives returned to us. Unfortunately we do not yet have a vaccine, which will allow us to do that. So this is our best chance of regaining control of the virus and avoiding a much-longer – and damaging – national lockdown,” he said.

Mr Drakeford promised to use the lockdown “very purposefully” to recruit more contact tracers and catch up on a backlog of contacts yet to be traced.

He said local lockdowns, under which two-thirds of the Welsh population have been living, had not proven to be adequate, but he promised that the lockdown would end on November 9th.

“This fire-break is the shortest we can make it, but that means it will have to be sharp and deep in order to have the impact we need it to have on the virus.”

The Welsh move came as talks between the British government and political leaders in Manchester failed to reach an agreement about putting the city into Tier 3, the highest level of local lockdown. Local leaders want more financial support for businesses and workers hit by the lockdown before they agree to moving into the highest tier.

Britain reported a further 18,804 coronavirus cases on Monday, and 80 further deaths, as the number of patients on ventilators passed 500 for the first time since the height of the pandemic in the spring.

Health secretary Matt Hancock told the House of Commons that he was worried about the rise in cases among people over 60, especially in Liverpool, Lancashire and Greater Manchester.

“We are doing everything in our power to suppress the virus, and support the economy, education and the NHS, until a vaccine is available. That is the right strategy. Charting a path that allows for the greatest economic and social freedom possible, whilst protecting life.”

Mr Hancock defended his government’s underperforming test and trace system in the face of criticism from Conservative MPs as well as the opposition.

“I think it is unlikely that we will end up with a truly sterilising vaccine that completely stops infection. It is likely that this disease will circulate and be pandemic. My assessment – and I think that’s the view of many people – is that’s the likely outcome,” he said.

“Clearly as management becomes better, as you get vaccination that will decrease the chance of infection and the severity of the disease – or whatever the protocols of the vaccines are – this then starts to look more like annual flu than anything else, and that may be the direction we end up going in.”