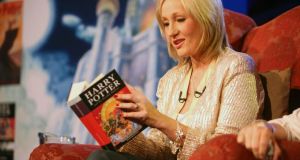 JK Rowling at the launch of ‘Harry Potter and the Deathly Hallows’ in 2007. The BBC has unveiled plans for a TV series based on her crime novels. Photograph: Jamie Turner/Bloomsbury/PA

The BBC has unveiled plans for a TV series based on the crime novels written by JK Rowling under the name Robert Galbraith.

‘The Cuckoo’s Calling’ became a huge best-seller after the ‘Harry Potter’ writer was unmasked as its author when her cover was blown by a legal firm that had worked for her.

That book and its follow-up, ‘The Silkworm’, both feature private eye Cormoran Strike and will form the basis of the BBC One drama with the corporation saying Rowling will “collaborate on the project” with the number and length of episodes to be decided.

Director of BBC Television Danny Cohen said: “It’s a wonderful coup for BBC Television to be bringing JK Rowling’s latest books to the screen. With the rich character of Cormoran Strike at their heart, these dramas will be event television across the world.”

The shows will be produced by Bronte Film and TV, who worked on the BBC drama of Rowling’s novel ‘The Casual Vacancy’, which will be screened in February.

Its chairman, Neil Blair, said: “We’re delighted to be bringing these best-selling novels to the screen and to be working once again alongside the BBC.”

Speaking earlier this year at the Theakstons Old Peculier Crime Writing Festival in Harrogate, North Yorkshire, Rowling said she wanted to make the books into “a series” that would run for longer than her hugely successful seven Harry Potter books”.

She said: “It’s pretty open ended. I really love writing, so I don’t know that I’ve got an end point in mind.

“One of the things I love about this genre is unlike Harry Potter, where there was a through line, where there was an overarching story, a beginning and end, you are talking about discreet stories. So while a detective lives, you can keep giving him cases.”