Experts warn Covid cases are doubling every seven days in England, and could reach 50,000 a day by the middle of October 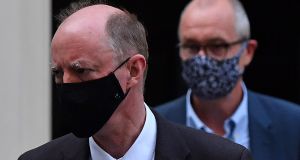 All pubs, bars and restaurants in England will have to close at 10pm from next Thursday, and will be limited to table service only under new measures aimed at slowing the rise of coronavirus cases.

Boris Johnson will announce the new restrictions in the House of Commons at lunchtime on Tuesday, and make a televised address to the nation at 8pm.

The move comes after Britain’s Covid-19 alert level was raised on Monday from three to four, meaning the spread of the virus is high or rising exponentially.

Britain’s senior scientific experts warned that coronavirus cases are doubling every seven days, and could reach 50,000 a day by the middle of next month and 200 deaths a day in November if no new restrictions are imposed.

“No one underestimates the challenges the new measures will pose to many individuals and businesses. We know this won’t be easy, but we must take further action to control the resurgence in cases of the virus and protect the NHS, ” a Downing Street spokesperson said on Monday night.

Scotland and Wales are also poised to extend restrictions, and the Northern Ireland Executive has banned the mixing of households indoors in most circumstances, with no more than six people from two households allowed to meet in a garden.

“If this continues along the path the number of deaths directly from Covid could rise on an exponential curve, and you can move from small numbers to really very large numbers. We have, in a bad sense, literally turned a corner, although only relatively recently,” said Prof Whitty.

“At this point the seasons are against us. We are now going into the seasons, late autumn and winter, which benefit respiratory viruses, and it is very likely they will benefit Covid as they do flu.”