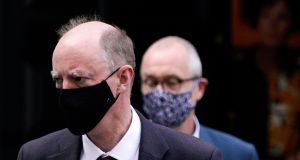 Britain’s senior scientific experts have warned that Covid-19 cases are doubling every week and could reach 50,000 a day by the middle of October if no new restrictions are imposed.

Chief medical officer Chris Whitty and chief scientific adviser Patrick Vallance said that could mean 200 daily deaths from the disease a month after that.

“The challenge, therefore, is to make sure the doubling time does not stay at seven days. That requires speed, it requires action and it requires enough in order to be able to bring that down,” Sir Patrick said.

The two men gave a televised briefing at Downing Street outlining the current state of the pandemic but took no questions from the media and did not make specific policy recommendations.

About 70,000 people in Britain are believed to have the virus and although the recorded number of new daily cases is about 4,000, the Office for National Statistics (ONS) estimates the figure is more likely about 6,000.

Less than 8 per cent of the British population has been infected with the virus, although the percentage in London is twice as high.

“If this continues along the path, the number of deaths directly from Covid could rise on an exponential curve, and you can move from small numbers to really very large numbers,” he said. “We have in a bad sense, literally turned a corner, although only relatively recently. At this point, the seasons are against us, we are now going into the seasons, late autumn and winter, which benefit respiratory viruses and it is very likely they will benefit Covid as they do flu.”

Britain’s Covid-19 alert level was raised on Monday to four, meaning the spread of the virus is high or rising exponentially. Scotland’s first minister, Nicola Sturgeon, signalled the imposition of tighter restrictions on social contacts and the Welsh government extended local lockdowns to cover much of south Wales.

Labour’s shadow health secretary, Jonathan Ashworth, said the party would support further restrictions but he criticised the government’s failure to improve its testing and contact-tracing system.

“None of us want to see another lockdown or circuit break but we of course understand if one becomes necessary. But Test, Trace and Isolate should have been fixed. That failure has left us vulnerable and exposed. Now we must act with speed to save lives and minimise harm,” he told the House of Commons.

Prime minister Boris Johnson faces a revolt from Conservative MPs who are unhappy with the sweeping nature of the restrictions introduced in the past six months and want Parliament to have more oversight from now on.

Graham Brady, chairman of the 1922 Committee of backbenchers, wants a debate in the Commons before the government’s coronavirus powers are extended.

“The British people are not used to being treated like children. The government has got into the habit of ruling by decree in respect to the coronavirus issue without the usual debate and discussion and votes in parliament that we would expect on any other matter,” he told the BBC.