Heidi Allen, Anna Soubry and Sarah Wollaston, three former Tory MPs who have quit the party over its Brexit strategy, take their seats on the opposition benches at the House of Commons. Video: UK Parliament TV 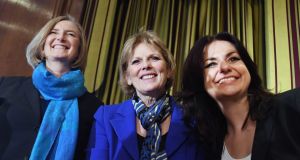 MPs Sarah Wollaston, Anna Soubry and Heidi Allen during a press conference in London where they announced they have resigned from the Conservative Party. Photograph: Andy Rain/EPA

Three MPs have quit the Conservative Party to join the new Independent Group in a major blow to prime minister Theresa May’s authority.

Heidi Allen, Anna Soubry and Sarah Wollaston hit out at Mrs May’s “disastrous” handling of Brexit as they quit. The three – who will join the eight ex-Labour MPs who have formed TIG – claimed Mrs May had failed to stand up to the “hard line” European Research Group (ERG) of Brexiteers.

The move poses a fresh headache for Mrs May as she prepared to face prime minister’s questions in the House of Commons before heading to Brussels for Brexit talks with Jean-Claude Juncker on Wednesday evening.

In a letter to Mrs May, the three MPs said: “We no longer feel we can remain in the party of a Government whose policies and priorities are so firmly in the grip of the ERG and DUP.

“Brexit has re-defined the Conservative Party – undoing all the efforts to modernise it. There has been a dismal failure to stand up to the hard line ERG which operates openly as a party within a party, with its own leader, whip and policy.” They added: “The final straw for us has been this Government’s disastrous handling of Brexit.”

In a statement, Mrs May said she was disappointed by the decision of the three to quit the party. “I am saddened by this decision – these are people who have given dedicated service to our party over many years, and I thank them for it,” she said.

“Of course, the UK’s membership of the EU has been a source of disagreement both in our party and our country for a long time. Ending that membership after four decades was never going to be easy. But by delivering on our manifesto commitment and implementing the decision of the British people we are doing the right thing for our country. And in doing so, we can move forward together towards a brighter future.”

It is with a heavy heart I have today resigned from the Conservative Party. pic.twitter.com/q0j7m5ylUX

Mrs May said she was determined the Conservative Party would still offer “decent, moderate and patriotic politics that the people of this country deserve”.

Ms Soubry later told a news conference that the Conservative Party had been taken over by right-wing, pro-Brexit lawmakers. “The truth is, the battle is over and the other side has won. The right-wing, the hard-line anti-EU awkward squad that have destroyed every [Conservative] leader for the last 40 years are now running the . . . party from top to toe,” she said.

On Tuesday evening Labour MP Joan Ryan became the eighth Labour MP to resign and join the breakaway Independent Group of Labour exiles, who include Luciana Berger and Chuka Umunna.

The former Tory chancellor Ken Clarke said on Wednesday he believed some Tory MPs were considering joining the new Independent Group, which is expected to be a precursor to a new political party.

“Certainly some members of parliament are getting very fed up,” he told the BBC Radio 4 Today programme.

“There are some, not including me, who probably are contemplating leaving if the party moves too far to the right and no longer represents what they regard as the mainstream Conservative views they have held for all the previous years. I hope that doesn’t happen. I hope it doesn’t come to that.”

“At the moment, there are people who – for now – may have their boots within the Conservative or Labour parties, but not their minds, nor their hearts,” the former Tory prime minister told an audience at the University of Glasgow on Tuesday, warning that both parties were being, “manipulated by fringe opinion”.

Ms Ryan, the MP for Enfield North, said she had been a member for four decades but blamed her departure on what she claimed was the Labour leadership’s “dereliction of duty” in tackling antisemitism.

Ms Ryan claimed there were “many very, very unhappy” MPs in Labour who could come to a similar decision and join the Independent Group of MPs. Ian Austin, MP for Dudley South, told his local paper, the Express and Star he would make a decision about his own future by the end of the week.

“People, me included, are going to be thinking long and hard about the position we’re in now,” he said. – Guardian/PA