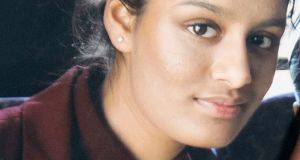 The newborn son of Shamima Begum, the young London woman who left the UK four years ago to join Islamic State, has died and been buried in a Syrian refugee camp.

Three sources confirmed the child’s death, including a Kurdish intelligence official who said the infant had been hospitalised in al-Roj camp in north-eastern Syria with breathing difficulties several times in the past week.

A friend of Ms Begum said that “the baby turned blue and was cold” before being rushed to a clinic inside the camp. Jarrah is understood to have been buried along with two other children who were burned in a fire on Thursday night.

His death will raise fresh questions about conditions in north Syrian camps, and put protection obligations for some of the world’s most vulnerable children in the spotlight.

Ms Begum (19) has been told by the British government that she will be stripped of her citizenship after fleeing the UK to join Islamic State, also known as Isis, and reaffirming her commitment to the terror group after surrendering to Kurdish forces in eastern Syria.

Such a move would leave her stateless, and has been criticised by child welfare advocates who have said children of foreign nationals remain dangerously exposed to life-threatening conditions while in detention.

Hundreds of children born to foreign nationals remain in al-Hawl camp, where Ms Begum gave birth, their parents ostracised by their home countries after they left to join Isis. Ms Begum’s lawyer, Tasnime Akunjee, had said: “We have strong but as yet unconfirmed reports that Shamima Begum’s son has died. He was a British citizen.”

Ms Begum was 15 when she travelled with two other schoolgirls to join the terror group in February 2015. She married Dutch national Yago Riedijk (27), soon after arriving in Syria. All three of their children are now confirmed to have died.

Ms Begum resurfaced heavily pregnant last month and spoke of her desire to return to the UK, as the self-styled caliphate collapsed.

Human rights lawyer Clive Stafford Smith said: “It is very sad to hear that Shamima Begum has just watched her third child die in just a few months. While she has made some very stupid decisions, and nobody is saying otherwise, she is still a teenager.

“It is also sad to see [British home secretary] Sajid Javid trying to better his chances of becoming prime minister by illegally stripping her of her passport, rather than maturely focusing on the needs of a helpless infant who might have been rescued. Indeed, it is just this kind of ill-considered populism that is further alienating many Muslims when we should be proving that we really do believe in human rights for all.”

Hundreds of children born to foreign nationals remain in Syrian camps, where women and children who left the last areas held by Isis have been transferred to by Kurdish forces. Many governments have not formalised a position on how to deal with nationals who left to join Islamic State over the past five years. France has said it would repatriate 130 children, but is less willing to allow their parents to return. The UK has yet to formalise a policy, but some citizens have been allowed to re-enter.

The International Rescue Committee said the number of infant deaths in al-Hawl reached 100 on Friday, a milestone that occurred amid persistent reports of worsening conditions in the camp, where a population that was already at breaking point has been swollen by a further 12,000 arrivals in the past 48 hours.

All recent arrivals have come from the town of Baghouz, the last refuge of Islamic State that has come under intensive attack by Kurdish forces surrounding it

Misty Buswell, International Rescue Committee’s Middle East advocacy director, said: “The IRC and other agencies are doing all they can do help the new arrivals but al-Hawl camp is now at breaking point. No one could have guessed that such a large number of women and children were still living in Baghuz.

“There is now an urgent need for thousands more family tents to get to al-Hawl to help shelter the latest arrivals as well as increased funding to support the health crisis unfolding at the camp.”

The IRC says at least 100 people, overwhelmingly children, have died en route to the camp or soon after arriving. Two-thirds of the deaths are babies and infants under five years old, it claims.

“[This is] due to a combination of malnutrition and hypothermia,” said Buswell. “Unfortunately, this figure could be the tip of the iceberg as we’ve been told some children also died as people crossed the desert to escape Baghuz and were buried before they even began the journey.”

Many of the women arriving at the camp are either heavily pregnant or have recently given birth. Some women have given birth in trucks en route to the camp. – Guardian