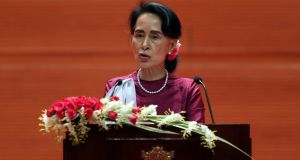 Aung San Suu Kyi is to be stripped of the Freedom of the City of Oxford, where she studied as an undergraduate, over her response to the Rohingya crisis.

Oxford city council voted unanimously to support a cross-party motion that said it was “no longer appropriate” to celebrate the de facto leader of Myanmar. The council is to hold a special meeting to confirm the honour’s removal on November 27th.

Council leader Bob Price supported the motion, reportedly calling it an “unprecedented step” for the local authority, according to the BBC.

In recent months, Ms Suu Kyi has drawn increasing criticism for her apparent defence of Myanmar’s treatment of its Rohingya minority, described by the UN as a “textbook example of ethnic cleansing”.

Oxford council bestowed the freedom of the city on her in 1997, when she was being held as a political prisoner by Myanmar’s military junta.

The decision to remove the award comes after the Oxford college where Ms Suu Kyi studied recently removed her portrait from public display.

The governing body of St Hugh’s college decided to remove the painting of the Nobel laureate from its main entrance.

A number of institutions say they are reviewing or removing honours bestowed on Ms Suu Kyi during her campaign for democracy.

Unison, the UK’s second largest trade union, announced last month that it would suspend Ms Suu Kyi’s honorary membership and urged her to do more to denounce the plight of the Rohingya people.

Bristol University, one of a string of universities that awarded honorary degrees to the Burmese leader during her time in opposition, also said it was

reviewing its award in light of accusations of brutal mistreatment of the Rohingya.

The London School of Economics student union said it would be stripping Ms Suu Kyi of her honorary presidency.

In the Republic, Minister of State Helen McEntee last month told the Dáil it is up to Dublin City Council to decide whether to strip Ms Suu Kyi of the freedom of the city.

Ms McEntee was responding to calls for Ms Suu Kyi to be stripped of the honour with which she was honoured for her efforts to secure democracy in Myanmar.

The Minister said Ireland as a member of the EU was seeking to find solutions both in a bilateral context with Myanmar and at international level through the UN General Assembly and the Human Rights Council.

As a leader of Myanmar’s opposition, Ms Suu Kyi won international praise and a Nobel Peace Prize in 1991. Despite being barred from running for president, she won a decisive victory in the country’s 2015 election, and was eventually given the title of state counsellor.

Meanwhile, a major fundraising appeal has been launched to help the hundreds of thousands of people fleeing violence in Burma.

The 13 member charities who make up the Disasters Emergency Committee (DEC) took action to step up their humanitarian relief as more than half a million people sought medical care, food and sanctuary.

The majority have been Muslim Rohingya people, who have fled to Bangladesh amid atrocities and fatalities in Rakhine state, on Burma’s western coast, following clashes between insurgents and security forces in recent weeks.