Democrat alliance with Party of Hope may upset Abe’s plans 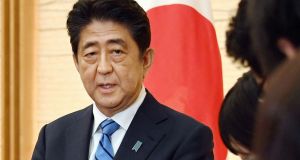 Politicians love to invoke crises and Japanese prime minister Shinzo Abe can certainly claim one on his watch.

Since North Korea lobbed its first missile of the Trump presidency way back in January, the threat of war in East Asia – even nuclear war – has become less unthinkable.

Months of sabre–rattling across the Pacific have drowned out allegations of cronyism that had sent Abe’s poll numbers sinking to dangerous lows.

His support has since rebounded, prompting him to dissolve the lower house on Thursday for a snap election in October – a year earlier than scheduled.

The decision, however, is viewed with suspicion: a survey by Kyodo news agency said 64 per cent of the public is unhappy with it. Most people believe the prime minister is hiding something.

Abe’s opponents say he is trying to dodge a grilling and that, after five years in power, his government has grown arrogant and corrupt. Luckily for him, the opposition parties have been in disarray – at least until now.

This week saw a dramatic development that suggests election day on October 22nd might not go as smoothly as planned. The Democratic Party, which ran Japan from 2009-2012, has thrown in its lot with a new outfit, titled, appropriately, the Party of Hope.

The driving force behind the party is Yuriko Koike, Tokyo’s charismatic and popular governor. Ambitious and driven, Koike was once a member of Abe’s Liberal Democratic Party but defied it last year to run against the LDP candidate in Tokyo.

Political revenge may have been a factor. Koike was defence minister in 2007 but missed her chance a year later to become Japan’s first woman prime minister when she lost out to Taro Aso. Her new local party crushed the LDP in summer elections in Tokyo.

The prime minister has been quick to denounce what he sees as political opportunism, saying to supporters this week they “cannot entrust the safety of Japan and the future of our children to a party that changes its banner just for the sake of an election”.

Abe sees the election as a chance to “more aggressively promote” his North Korea diplomatic policy, said the conservative Yomiuri newspaper this week. This policy depends mainly on standing lockstep with President Donald Trump to isolate the regime of Kim Jong-un with sanctions, backed by America’s military firepower.

Many countries would be happy to have Japan’s problems: full employment, falling crime, and the third-longest economic expansion since the second World War. After six decades in power for all but a handful of years, Abe’s party is hoping that, in an uncertain world, voters will opt for the devil they know.

Opinion surveys suggest they are right. The LDP leads Koike’s neophyte party by five-to-one, according to a survey this week in the Nikkei newspaper. The ideological coherence of the Party of Hope is in some doubt: Koike herself is considered a right-winger but the Democrats are a mixed bag of progressives and conservatives.

Few expect Koike to win but she could wound Abe. The LDP and like-minded parties control both houses of parliament. The way was clear for the prime minister to amend Japan’s pacifist constitution – which needs a vote by two-thirds of both houses – and end the ambiguous status of Japan’s military.

Divisive though the plan is, that would solidify Abe’s legacy among conservatives who view the American-penned constitution as a shameful blot on the nation’s history. The LDP needs a simple majority in the lower house to keep that plan alive, but any reduction of seats could trigger a leadership contest.

Whatever happens, Abe has a fight on his hands.