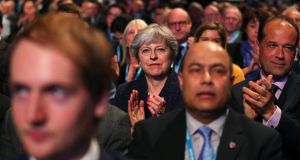 Philip Hammond has warned Conservatives against downplaying the difficulties presented by Brexit, adding that the United Kingdom’s economic future would remain closely tied to the European Union. The chancellor told his party’s conference in Manchester that the UK joined an economic union in 1973 and was now uncomfortable with being part of a political union.

“We are leaving the EU, not leaving Europe. Our economic future will remain closely linked with the EU for many good reasons. But our political future will be our own. Our EU partners can go their way. We wish them well. But we will not join them on a voyage to ever closer union,” he said.

Mr Hammond stressed the importance of a transition arrangement after Brexit, which would offer businesses the certainty they need to plan ahead. And he said such a period should last “around two years”, as opposed to setting a strict upper limit of two years, as the foreign secretary, Boris Johnson, demanded last week.

“There are moments in history when the choice is binary, like the decision in the referendum last year. But there are other times when the challenge is more complex. Now is such a time, as we pick our way carefully and cautiously across the difficult terrain of EU negotiation, to ensure we arrive in good order on the fertile plains at the other side. And as we tread that terrain we need the path well lit, the hazards well signposted,” the chancellor said.

Brexit divisions loom over the Conservative conference in Manchester, with MPs and delegates split between Mr Hammond’s cautious approach and Mr Johnson’s demand for a short transitional arrangement with no shadowing of EU regulations after it ends.

The UK environment secretary, Michael Gove, who campaigned to leave the EU in last year’s referendum, acknowledged that Brexit presented challenges but said it was important to emphasise the upside.

“While we should never underestimate the work that needs to be done, neither should we understate the reinvigorating power of restoring democratic control to politics. Inside the EU ministers have been, and still are, prevented from acting as they think right and as the people want,” he said.

On immigration, a majority voted in favour of retaining free movement but with the government making full use of existing controls. On the overall deal, they preferred a comprehensive trade agreement combined with favourable access for EU citizens. If that proves unattainable, they again wanted the UK to stay in the single market.

The Citizens’ Assembly on Brexit is part of the UK in a Changing Europe, an academic research programme.

“These findings are important, because this is the first opportunity UK citizens have had since the 2016 referendum to consider in depth what version of Brexit they want, and to communicate that to policymakers,” the assembly project’s leader, Alan Renwick, said.

“After two weekends of study and deliberation, drawing on expert evidence and balanced briefing materials, citizens concluded that politicians should seek a bespoke deal with the EU. But if that proves impossible, they would rather remain close to Europe than follow some politicians’ proposal to go it alone.”