Tymoshenko may visit Dublin for meeting next week 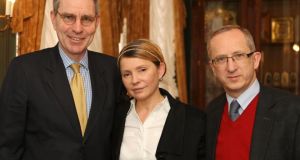 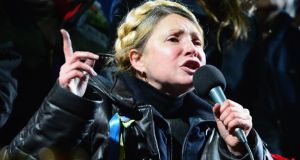 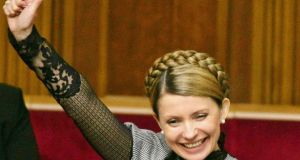 Ukrainian opposition leader Yulia Tymoshenko may travel to Ireland next week for the European People’s Party (EPP) congress in Dublin.

Ms Tymoshenko was freed from prison in Ukraine on Saturday after a law was passed in the the Ukrainian parliament.

In a statement this morning, Ms Tymoshenko’s party said she would travel to Berlin for back surgery after attending a meeting of the European People’s Party.

A former prime minister of Ukraine, the 53-year old opposition leader is a member of the EPP - the centre-right political grouping in the European Parliament which counts Ms Tymoshenko’s party, Batkivshchyna, as a member. Fine Gael is also a member of the EPP grouping. Other figures from Ms Tymoshenko’s party, including former boxer Vitali Klitschko, have also been invited to the summit.

The release of Ms Tymoshenko was a key consideration for the European Union in the run-up to the Vilnius summit in November at which an agreement with Ukraine had expected to be signed. The decision by the Ukrainian government to reject the deal and instead accept a $15 billion bailout from Russia sparked protests in the Ukrainian capital.

Although a controversial figure to some, Ms Tymoshenko was regarded as a political prisoner by the EU. The EPP president Joseph Daul welcomed the release of the former prime minister, after nearly three years of “unjust and politically motivated” imprisonment by the Yanukovich regime.

“Yulia Tymoshenko has been a constant source of pride and inspiration to all of us in the EPP family,” Mr Daul said, adding: “The EPP is proud to have stood up repeatedly for Yulia Tymoshenko throughout her long ordeal, even when others did not.”

The EPP’s membership extends to political parties operating in countries outside the European Union, including Ukraine.

The EPP congress takes place on Thursday and Friday next week in the Convention Centre, Dublin at which the group is expected to select a candidate to run as the EPP’s nomination for the European Commission president, a position that will become vacant after European elections in May. The event is being hosted by Fine Gael, which is a founding member of the EPP and applied to host the congress. Dublin was announced as the venue for the summit last June.

Among the political leaders expected to attend the conference are German chancellor Angela Merkel and Spanish prime minister Mariano Rajoy.

It is unclear whether former Italian prime minister Silvio Berlusconi will travel to Dublin for the event . In a statement last week Mr Berlusconi (77) suggested he might seek to defy the terms of his current one-year conviction for tax fraud and come to Dublin next month for the congress. A spokeswoman for the EPP told the Irish Times that a final attendee list has not yet been finalised.