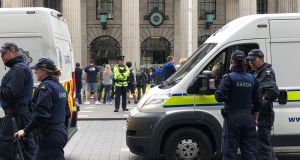 ‘Alt-right’ protest in July in Dublin resulted in scuffles with opposition protestors and the arrival of the Garda public order unit, which was not deployed. Photograph: Alan Betson

The Garda public order unit is being put on standby ahead of an anti-lockdown and anti-facemask protest due to take place in Dublin on Saturday.

The group is led by Maeve Murran, a “kinesiologist” and anti-vaccination campaigner, and Kelly Johnson, a homeopath who has claimed vaccines can cause autism.

In May, Health Freedom Ireland called for a complete end to the Covid-19 lockdown.

The issues being protested on Saturday include “insistence on using the store-provided hand sanitisers, even when people bring their own” and “discussion of social distancing, mask wearing and other measures in school,” according to a statement.

The group said it has planned a peaceful protest which will be addressed by, among others, Dolores Cahill, the chair of the Irish Freedom Party and Ben Gilroy, a self-described anti-eviction campaigner who has been banned from acting as a legal adviser by the courts.

The group has been organising buses from around the country and selling branded merchandise.

Gardaí also believe a significant number of people may be travelling from abroad to attend. The German group Querdenken which has organised large anti-lockdown protests in Berlin, have been involved in providing buses from the continent.

Gardaí fear public anger over the Oireachtas Golf Society scandal, combined with the possibility of left-wing counter-protests could lead to disturbances and clashes

Officers in Store Street have been told to prepare for possible violence and the public order unit, including members from around the city, is expected to be on standby. However, as per standard protocol it will remain out of sight unless needed.

“There is worry that the anger generated by the controversy in Galway [surrounding Wednesday’s golf dinner] and the possibility of more [Covid-19] restrictions will lead to a large turnout and heightened temperatures,” a senior garda source said. “That comes with public safety risks.”

It is understood no formal counter-protest has been organised but there is concern about clashes with individuals or small groups opposed to the far-right presence at the march.

Several recent far-right protests, including a demonstration against Minister for Children Roderic O’Gorman over false accusations he endorsed child abuse, have resulted in minor incidents with counter-protesters.*

A Garda spokesman said the event will be policed in line with standard procedures.