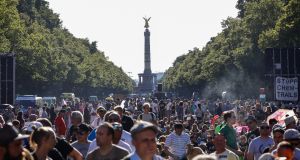 Belgian and German infection rates inched higher and Switzerland ordered the closure of nightclubs in Geneva after a 40 per cent increase in Covid-19 cases in the canton.

Meanwhile Mexico overtook the UK to become the country with the third-most deaths globally.

The current coronavirus death toll stands at more than 680,500, with more than 17.6 million infections worldwide.

Protesters against coronavirus restrictions have gathered in Berlin for a demonstration titled The End Of The Pandemic — Freedom Day.

It comes amid increasing concern about an upturn in infections in Germany.

A crowd of people whistling and cheering, and with few masks in sight, marched from the Brandenburg Gate on Saturday ahead of a rally on a wide boulevard that runs through the city’s Tiergarten park.

Protesters held up homemade placards featuring slogans that included “Corona, false alarm”, “We are being forced to wear a muzzle” and “Natural defence instead of vaccination”.

Some chanted: “We’re here and we’re loud, because we are being robbed of our freedom.”

Police estimated that about 17,000 people turned out.

Demonstrations against restrictions this year have drawn a variety of people, including some conspiracy theorists and right-wing populists.

People came from various parts of Germany for Saturday’s protest.

Germany’s management of the pandemic has widely been viewed as relatively successful, with a lower death rate than comparable countries.

The country has been easing lockdown measures since late April but social-distancing rules remain in place, as does a requirement to wear masks in public transport and shops.

Infection figures have crept up over the past few weeks and officials have warned against complacency.

The UK Government said 46,193 people had died in hospitals, care homes and the wider community after testing positive for coronavirus in the UK as of 5pm on Friday, up by 74 from the day before.

Separate figures published by the UK’s statistics agencies show there have now been more than 56,400 deaths registered in the UK where Covid-19 was mentioned on the death certificate.

The UK Government also said that in the 24-hour period up to 9am on Saturday, there had been a further 771 lab-confirmed cases. Overall, a total of 303,952 cases have been confirmed.

In France, new cases of Covid-19 cases topped 1,300 for the third-consecutive day.

Friday evening’s figures showed an increase of 1,346 confirmed new coronavirus cases in the previous 24 hours and 15 new clusters, taking the number of clusters currently under investigation to 157.

Travellers entering from 16 countries where the virus is circulating widely now must undergo virus tests upon arrival at airports and ports.

The country is not permitting general travel to and from the countries, which include the United States and Brazil.

The testing requirement therefore only applies to people entering under limited circumstances, including French citizens who live in these countries. Those who test positive as of Saturday must quarantine for 14 days.

Switzerland ordered the closure of nightclubs in Geneva until August 23rd and increased restrictions on bars and restaurants following a 40 per cent increase in Covid-19 cases in the canton.

Customers in bars and restaurants must remain seated while they are consuming food or beverages and wear a mask when not seated, according to a notice published late Friday.

A record 658 new coronavirus cases were reported in Poland on Saturday, up from 657 on Friday, the Polish health ministry wrote in a Twitter post. Deaths rose by 5 to 1,721.

Mexico now has the third most Covid-19 deaths in the world, behind Brazil and the United States, where a hurricane bearing down on the East Coast is threatening to complicate efforts to contain the virus.

Hurricane Isaias’ imminent arrival forced the closure of some outdoor testing sites even as Florida reached a new daily high in deaths, and other states in the path of the storm prepared emergency shelters that comply with social-distancing measures.

Meanwhile, Mexican health officials on Friday reported 688 new deaths, pushing the country’s confirmed total to over 46,600. That put Mexico just ahead of the UK, which has more than 46,100, according to the tally by Johns Hopkins University.

South Korean prosecutors arrested the elderly leader of a secretive religious sect as part of an investigation into allegations that the church hampered the government’s anti-virus response after thousands of worshippers were infected in February and March.

Prosecutors in the central city of Suwaon have been questioning 88-year-old Lee Man-hee, chairman of the Shincheonji Church of Jesus, over charges that the church hid some members and under-reported gatherings to avoid broader quarantines.

The Suwon District Court granted prosecutors’ request to arrest Mr Lee over concerns that he could tamper with evidence.

Mr Lee and his church have steadfastly denied the accusations, saying they are cooperating with health authorities.

Kim Young-eun, speaking for the church, said it will do its best so that “the truth is clearly proved in court”.

Its branch in the southern city of Daegu emerged as the biggest cluster after infections spiked in late February.

Health authorities used an aggressive test-and-quarantine programme to contain the outbreak in Daegu and nearby towns by April, but the country has seen a resurgence of the virus in the Seoul metropolitan area since late May.

At least 23 of the, were tied to international arrivals.

Belgium’s authorities said on Saturday that 745 more people have been infected with coronavirus in the past 24 hours, versus 671 the day before. One more death was reported, bringing the total number of fatalities to 9,841, more than any other country in the world when adjusted for population size.

Australia’s most populous state, New South Wales, recorded 17 new cases in the past 24 hours on Saturday. The death toll in Australia has now exceeded 200.

Ninety-five people died from coronavirus in the past 24 hours in Russia, the fewest mortalities since 85 were recorded on July 27, taking the total to 14,058.

Finland became the first country in the Nordics to allow public gatherings of over 500 people, indoors as well as outdoors, starting Saturday. The government also dropped its recommendation that people work from home.

A total of 386 passengers have been quarantined after a trip to Svalbard with a Hurtigruten cruise ship as coronavirus infections were recorded on board the cruiser.

MS Roald Amundsen has been isolated at the quay in Tromso in Norway after four crew members tested positive for Covid-19, news agency NTB reported Saturday. The ship arrived in Tromso from Svalbard on Friday and 160 crew members are being kept in isolation on board.

The 177 passengers who have left the cruiser have been instructed to self-quarantine. Hurtigruten said on Friday that it’s contacting 209 passengers aboard an earlier trip.

Some countries are seeing hopeful signs: China reported a more than 50 per cent drop in newly confirmed cases in a possible indication that its latest major outbreak in the north-western region of Xinjiang may have run its course.

However, in Hong Kong and elsewhere, infections continue to surge.

Hong Kong reported more than 100 new cases as of Saturday among the population of 7.5 million. Officials have reimposed dining restrictions and mask requirements.

Vietnam, a former success story, is struggling to control an outbreak spreading in its most famous beach resort.

A third person died there of coronavirus complications, officials said on Saturday, a day after it recorded its first-ever death as it wrestles with a renewed outbreak after 99 days with no local cases.

All three died in a hospital in Da Nang, a hot spot with more than 100 cases in the past week.

Thousands of visitors had been in the city for summer holidays and are now being tested in Hanoi and elsewhere.

Twelve additional cases were confirmed on Saturday, all linked to Da Nang Hospital.

Officials tightened security and set up more checkpoints to prevent people from leaving or entering the city, which has been in lockdown since Tuesday.

The global pandemic has affected nearly every aspect of this year’s Muslim pilgrimage to Mecca, with as few as 1,000 pilgrims already residing in Saudi Arabia taking part, down from 2.5 million last year.

The Saudi Health Ministry said there have been no cases of Covid-19 among this year’s pilgrims. All were tested, their movements monitored with electronic wristbands and required to be quarantined before and after.

India recorded its steepest spike of 57,118 new cases in the past 24 hours, taking its coronavirus caseload close to 1.7 million, with July alone accounting for nearly 1.1 million infections.

The country’s Civil Aviation Ministry delayed resumption of international flights by another month until August 31. But it will continue to allow several international carriers from the United States, Europe and the Middle East to operate special flights to evacuate stranded nationals.