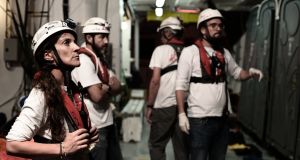 An Irish nurse aboard a ship carrying refugees to Spain, having been turned away from Italy, has described the Mediterranean as a “cemetery at sea” and appealed for a solution to the crisis.

Tensions on the migration issue have been deepening since Italy’s new government closed its ports to the Medecins Sans Frontieres (MSF) boat carrying 629 people it rescued from Libyan waters.

One of those volunteers on board, Cork-trained nurse Aoife Ní Mhurchú (41), told The Irish Times their delivery to safety had been needlessly prolonged by the sudden change in Italian policy.

Instead of docking there, the Aquarius is now enroute from just south of Sicily to the port of Valencia in Spain, but in quickly deteriorating weather conditions expected to bring four metre swells and 30 knot winds.

Describing the situation as “dire”, Ms Ní Mhurchu said “Italy’s decision to close its ports to MSF in my opinion is a disgrace.

“Italy has been toying with 629 lives by denying them disembarkation in the closest port of safety; these are people’s lives.”

On Tuesday, about 500 of the refugees were transferred to Italian coastguard vessels which are now in convoy with the Aquarius on its lengthy voyage to Spain.

French president Emmanuel Macron has stoked tensions by referring to Italy’s “cynicism and irresponsibility”, a mood reflected by those working with migrants attempting to flee to safety.

“The Mediterranean is a cemetery at sea,” Ms Ní Mhurchú said.

“This is not about search and rescue anymore, it’s about a broken asylum system and Europe closing its borders.”

A nurse for the last 15 years, it is Ms Ní Mhurchu’s second Mediterranean mission with MSF. She explained that for a 24 hour period, they had received no direction from the Italian Maritime Coordination Centre on what to do with the refugees. Those onboard were anxious, many fearful they would be returned to Libya.

The Aquarius now has 106 people onboard, mainly medical cases, and including 10 children and six pregnant women.

“They are doing good. We did have concerns about two of them but they are stable now,” she said.

“The majority of the medical cases are those with chemical burns that were caused by a mix of spilled fuel and salt water in the rubber boat.”

Another 40 people who were pulled out of the water are being monitored for respiratory complications.

“The people on board are calm and relieved that they have been offered a safe port in Spain.”

In the last five years, over 600,000 migrants have landed in Italy. The recent decision to halt the Aquarius’ passage to Sicily was taken by Italy’s new anti-migrant interior minister Matteo Salvini over the weekend.