World View: EU commissioner Máire Geoghegan-Quinn made a strong pitch for the indispensability of the humanities in understanding issues such as climate change 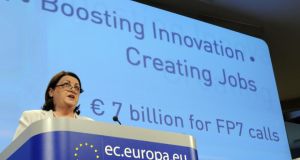 European commissioner Máire Geoghegan-Quinn at an announcement in 2011 of EU funding of €7 billion for research and innovation.

Sciences are conventionally divided between the hard and soft, the harder ones more reliable, even more true. Mathematical modelling, big data and experimental methods are hard, whereas interpretation of meaning, sense and social behaviour less dependable. The very word science gets restricted to the natural world, to which other disciplines aspire. Within the social sciences, economics leads the field because it seems most quantifiable.

Inevitably this approach prioritises the natural over the social sciences and the humanities in allocating research funds. It facilitates a technocratic and instrumental approach to innovation, assuming a simple linear path between scientific discoveries and market application. Thus biotechnology, nanotechnology and energy research usually top the lists and collar the funds. In the US for example the proportion of government investment in the natural against other sciences jumped from five to 200 times between 1979 and 2011.

All the more reason to welcome the remarks made by the European commissioner for research, innovation and science Máire Geoghegan-Quinn this week at a conference at the Royal Irish Academy on the contribution of the humanities and social sciences to the Horizon 2020 research programme of the European Union. Over this period its funds will reach €70 or €80 billion, one of the few to increase in an overall reduced budget.

She assured her audience the amount going to the humanities and social sciences in the EU over the last seven years – €623 million – would not change. That represented some 1.8 per cent of overall funding with a 3.6 per cent success rate for applications — compared to 46 per cent for nanotechnology, so the priorities are clear. Irish researchers drew down 1.5 per cent of the overall funds available, but less than 1 per cent in the humanities and social sciences.


Strong pitch
She also made a strong pitch for the importance, indeed the indispensability, of the social sciences and humanities in understanding such issues as the effects of climate change and whether people will buy into the cure the hard sciences propose. They are complementary. Indeed, she added, the “softer” sciences are harder to practise precisely because the world is constantly changing.

Historians, social scientists, political scientists and psychologists can explain armed conflicts or terrorism and make sense of motivations, ideologies and identities lying behind them, Geoghegan-Quinn argued. Events are moving so fast for decision-makers that there is less time to dig deep, reflect and weigh options. Europe is at a critical point when it is necessary to understand its diversity, culture and what binds it together. She quoted Simone de Beauvoir to illustrate these constructivist insights: “One is not born a woman, one becomes one”. And she wondered whether CP Snow’s case in his famous 1960s book on the two cultures, worrying that the natural sciences remained undervalued, has not now been inverted.

The Horizon 2020 programme invites such researchers to contribute to innovative, inclusive and reflective societies. The last phrase was added at the insistence of German researchers, whose philosophical tradition and more broad-based understanding of science as systematic human knowledge rather than simple reductive quantification won the argument.

That leaves ample scope for critical responses to these questions, as several contributors to the conference argued. Reconciling climate change and the reluctance to take the social action needed to stop it requires a proper understanding of ideology and power, for example, in which vested interests and existing structures must be confronted. Political dispute on such questions is unavoidable.


Robust methodologies
The humanities’ special contribution emphasises sense and meaning, both socially and individually. They have robust methodologies like discourse analysis to examine the roles of language and media, for example. And they know that a basic pluralism of ends and means is necessary in examining human wellbeing. This might open up room for alliances with other sciences, like mathematics, equally at home with diversity rather than reproducing Snow’s crude distinction between natural sciences and other branches of knowledge.

If the EU research programme’s commitment to cross-cutting themes such as climate change, health, demography and wellbeing, energy or secure societies is to be delivered on, these social scientists and humanities scholars demand they be embedded in their design and execution, not sidelined as after-thoughts. That means improving their own abilities to justify and explain their work and its enduring relevance and to work more in groups as well as on individual projects.
pegillespie @gmail.com